I saw my most excellent orthopaedic surgeon today and he told me the left knee is good to go. I've been taking Voltaren (Diclofenac) to reduce inflammation. The MRI indicates no tear or flap in the meniscus. So I'm good to go, and I'm going to be more disciplined about stretching before rides and taking Ibuprofen prophylactically.

I think that during my interruption of riding I've lost my mojo, I've broken the habit of daily riding and food discipline, so over the next few weeks I need to get back on track.

Rode 30 miles in 2h25m in Pittsburgh, half trails and half in traffic. Started at the Bastille, which was in today's news. Rode along the trails and crossed the 31st Street Bridge, left turn on Penn and left turn on Butler Street. Took this photo of the Lawrenceville Doughboy, which I've passed by a few times and never took the time to appreciate: 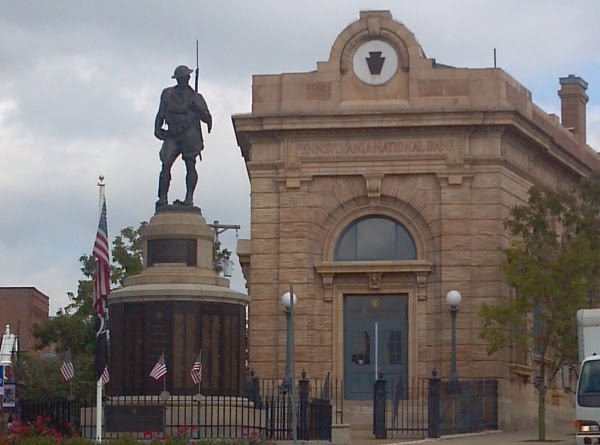 My takeaway was the bag over his chest for his gas mask, the leggings for the mire and sewage in the trenches, and the raincoat over his arm for the rain. WW1 was a cruel and terrible war, and for all of our improved techniques I don't know that anything about war has gotten any better. It's a great statue in that in preserves the memory of the viciousness.

Joined Route 8 South, Washington Blvd, Fifth, Penn to Bakery Square, and lunch at Coffee Roasters. Had an excellent vegetarian sandwich (eggplant, hummus, red peppers) and a chai tea latte and enjoyed the outside seating for a while. The day kept getting prettier as time advanced.

I must say that Pittsburgh drivers in these neighborhoods were extremely courteous, which may be due to the increased presence of bikes around here.

Out of Bakery Square it was Beechwood Blvd, Forbes, South Braddock, Hutchinson, Frick Park's 9 Mile Run Trail, the Duck Hollow Trail, and Second Avenue to join the Jail Trail. Although the tempting frisson of using the still-closed Bates Street Bridge was a siren's call, I took the Hot Metal Bridge and checked out the all-but-finished South Shore Riverfront Park, at SouthSideWorks below HofBrauHaus.

There are five ingots of steel which had been left on the site when the mill came down, and left again when the brownfield was reclaimed. Some people say that when a steel worker fell into the cauldron of hot metal - leaving no body for the family - they'd pour out an ingot in case the family wanted an artifact.

Having looked at these ingots up close now, there's no way any family was going to bring one of these things home.

I was also able to take a look at the 12.5M "South Shore Riverfront Park"; I guess part of the Gentrification NüSpeak is that it's supposed to be the South Shore, rather than SouthSide. (good luck with that). On reflection, if you build bike facilities like this, you can name them whatever you desire, really.

This is a photo of what the site looked like in March (via):

This is a photo of what it looks like today: