Tues Jan 24, 2017 18m
Mon, Jan 30, 2017 19m
Jan EOM:138m ytd:138m
Tuesday was a ride around town day. I was able to take a photo of the newly-placed sign on the Ft. Duquesne Bridge, which I am so pleased about: there was always the possibility of a transient cyclist bearing left and going airborne over the staircase. This is a great sign. 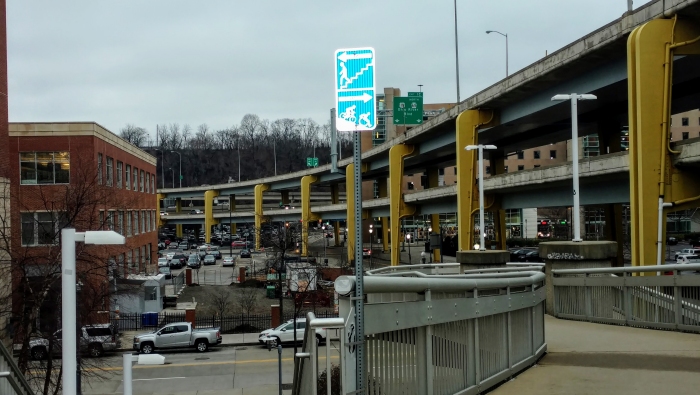 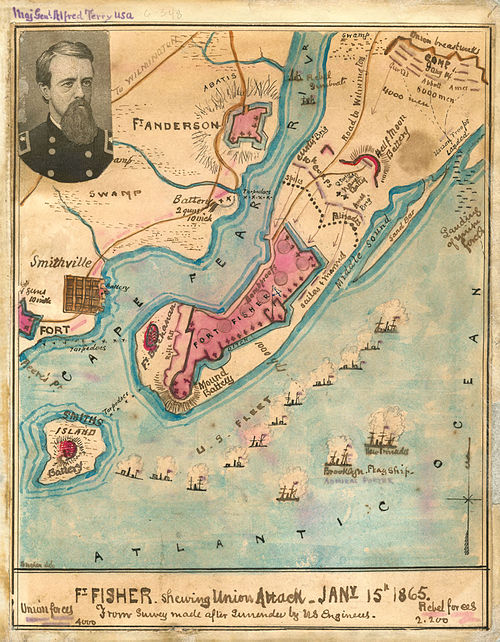 Monday I rode from Carolina Beach State Park, near Wilmington NC, to Federal Point. Lovely place, fairly typical of a beach town in winter months. All the historic signs down here, of course, talk about blockage runners and the great battle of Fort Fisher and unspoken (of course) is the fact that these were Confederate efforts in the War on Slavery.


The inlet is the Cape Fear River, which in more recent memory calls to mind a movie title.


After the fall of Norfolk, VA, Wilmington NC was the Confederacy's primary Atlantic seaport. The Naval Bombardment that preceded the battle of Fort Fisher was the world's largest known naval bombardment to that time. 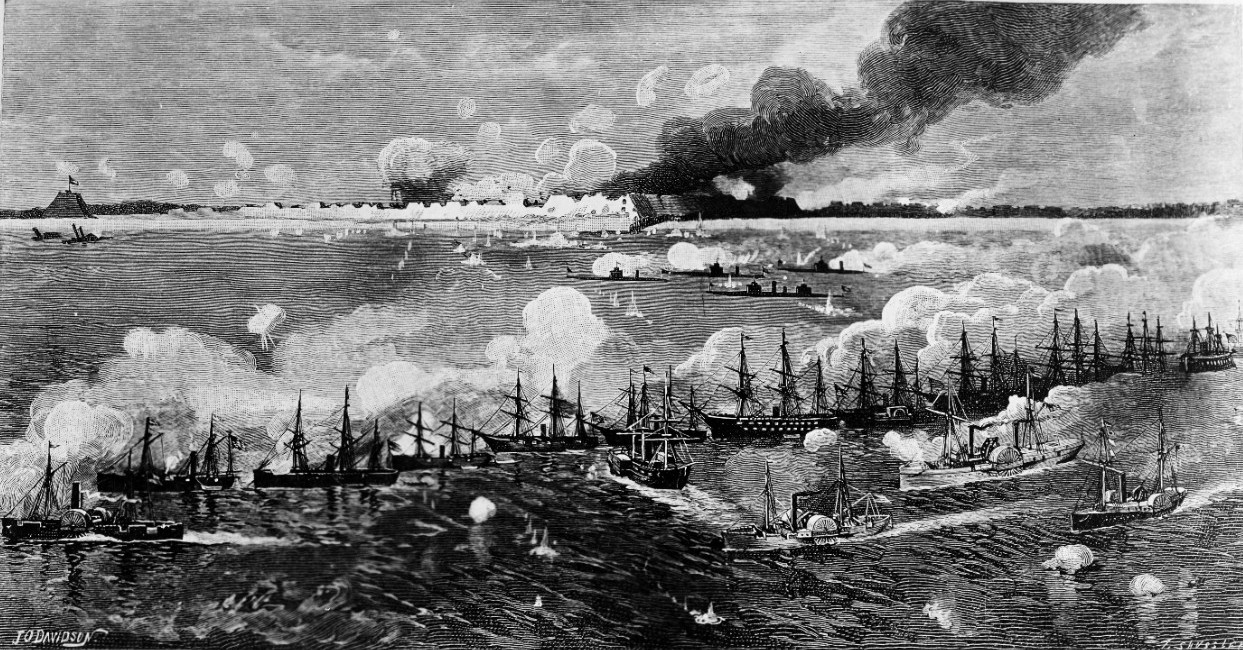 Carolina Beach is a nice place. There's a bit of a boardwalk and what looks like a few rows of carnival shops, closed for the season. Really nice swing-seats looking out to sea. 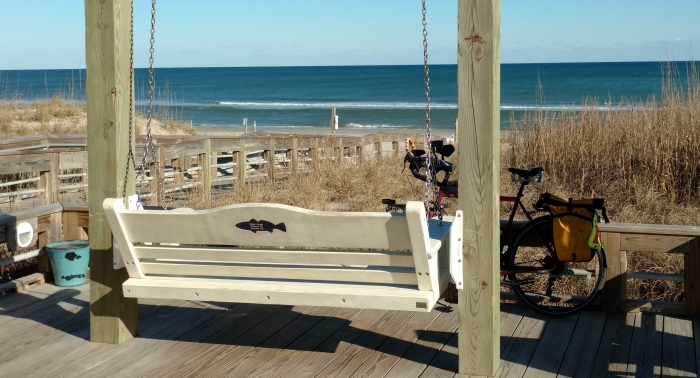 Ballad of Glacial Progress: Bike Lanes in the Great Bye-and-Bye 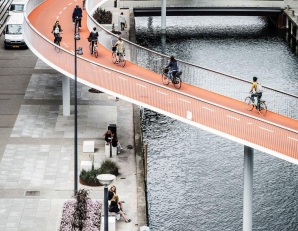 You can Bike, bye and bye,
on that Bike Lane besides the fray;
'twill be done on that great Someday;


So till then, keep your place,
can't ask cars to slow their pace;
don't yinz know this ain't Amsterdam?


There's no budget, there's no rush,
folks in Power want no fuss;
they'll get to it: When They Can.


Politicians shout Complete Streets,
autonomous cars are in the fleet,
but we lose when parking is the fight.


But for now: Take the lane! Ride inside! 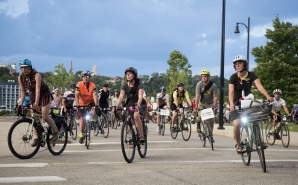 cars will bully, friends will die;
we'll mark the scene with a white Ghost Bike.


Join an Advocacy Group, go Ride in Silence,
whistle to block out the violence;
you'll have Bike Lanes in the bye-and-bye.

I must acknowledge that I came to know the phrase, "Pie in the Sky In the Bye-and-Bye" in late-1960's newspaper ads for the Rev. 'Ike' Eikerenkoetter, in the back pages of the NY Daily News when I was growing up. The Rev. Ike would say: "You don't have to wait for your pie in the sky by and by; have it now with ice cream and a cherry on top".

Thurs Jan19, 2017 18m
mtd:101m ytd:101m
I got to ride with RC and KC today, nice weather great time. We started Southside. Rode the Hot Metal Bridge, the Ft Duquesne Bridge where I saw a new sign warning about the split between the stairs on the left and the ramp on the right - I've always wondered if a transient cyclist might night propel themselves airborne for a brief moment if they didn't know there were stairs there.

We rode out to the Heinz Plant, and then rode the new-to-me bikeway/walkway along Route28 from Penn Brewery to the 31St Bridge. It was a nice ride. Then we rode out to the 40th Street Bridge, and out to Caffe d'Amore for great coffee.

Back inbound, stopped at The Clemente Museum in Engine House 25, which none of us have been to, and we need to check it out: 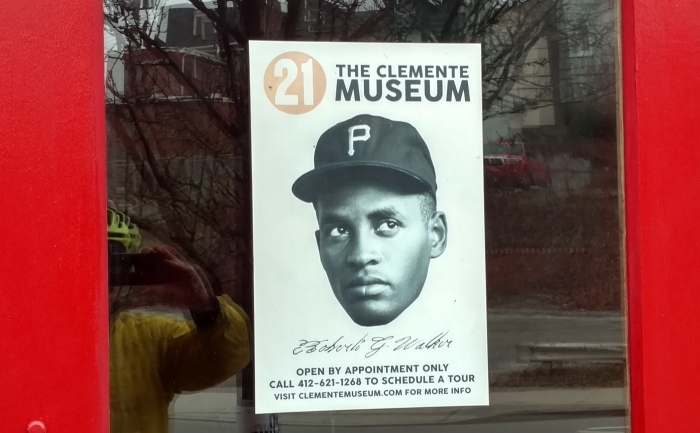 Stopped at Kindred so RC could ogle some hardware. Saw an amazing, old, wonderful Chinese bicycle with pushrod brakes.

Smithfield Street Bridge, Southside Trail, and I felt a bit of squishiness in my rear tire. Fortunately I got back to the vehicle while it was still rideable. This is my second flat in this set of Schwalbe's.

Started in Millvale. Crossed the 16th Street Bridge and noticed this monstrosity of a Borg-structure being erected.

This is just butt-ugly. People may build what they want, I suppose, but what I wonder is: can Pittsburgh possibly have used waterfront property for another car parking garage?

Rode to Point State Park, where the rivers had receded and the debris was being cleaned away. Rode over to Thick Bikes, to see the new signage, with letters constructed out of bike frame elements. 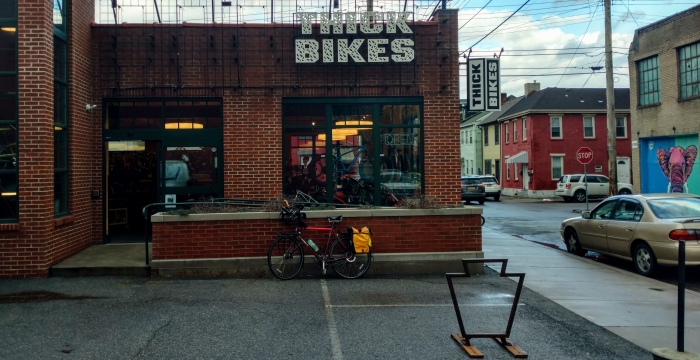 I think - although I cannot speak definitively on the subject - that a topiary will be installed in the framework. It is unwarranted speculation that the Living Wall will feature medical marijuana, and there is no basis for asserting that the Stairway to Nowhere at Thick will provide access to a planned Medical Dispensary. Just Saying.

Things that make me go: unnghhhh.

It was a very nice ride. The Mon-Yough Trail Council does a tremendous job on the trail. The Red Waterfall and the White Waterfall were both doing their thing and looked like they'd be cleaned up. The trail was very clean. Not too many people out, but a few.

In the Things that make you go, unnghhhh. category, some driver left the roadway on State Bike Route A and smashed a roadsign before getting back on course. They also smashed the Ghost Bike for Taylor Lee Banks that was affixed to the road sign. 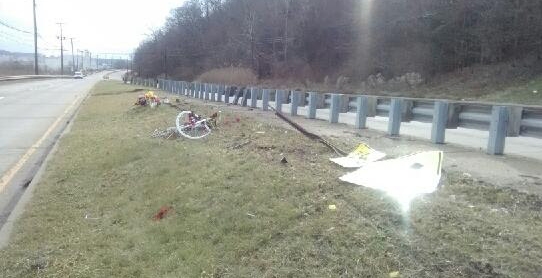 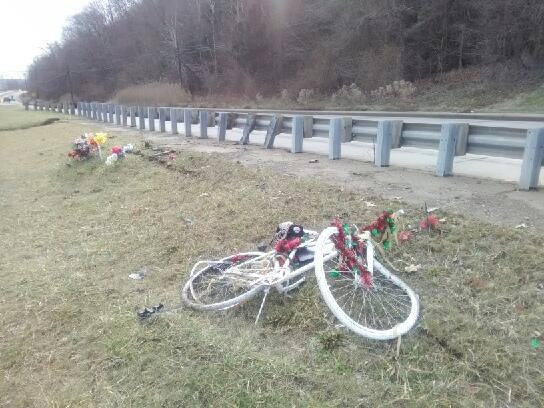 About two miles south on Route 51, which is also State Bike Route A, there's another Ghost Bike for Arthur Bell which was struck in the last year by a car that had departed the roadway. It's incredible how much out-of-control driving is going on.

To me, bicycles belong on trails, parks, playgrounds, etc.

If only "those people" would stay in their proper places. Barbara must not have heard of the "Bikes Belong" campaign. Perhaps even more to the point, perhaps Barbara never considered whether somebody from Robinson should be advocating for "her" parking spot in a city she's not a resident of. But I digress.

I've had a hard time aligning riding conditions (temps above 25F, dry?) with opportunities, and today I saw the chance to ride my bike to meet a friend for lunch in Carnegie. So I parked the van in Robinson and biked to Carnegie. It's a surprisingly easy connection via Campbell's Run Road. Although it's a two-lane with no real shoulder, all the other road users played nice. 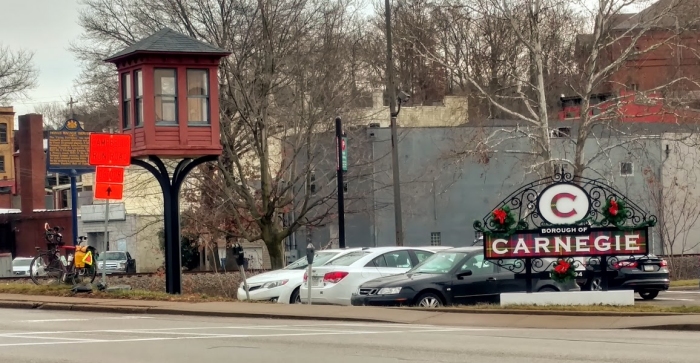 Obligatory Control Tower photo, at the Campbell's Run Road, Railroad Avenue, Mansfield Blvd interchange. An operator used to turn the road-lights red as trains approach. Imagine the train company saying, To me, cars belong in parking lots. Imagine the drivers saying, To me, trains belong in the rail yard. I would think we'd have a lot of very cross vehicles and operators. 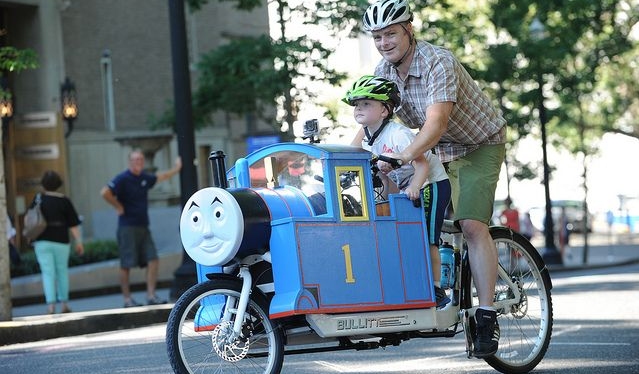 Shoppe Along the Way, Burgettstown

Parked at the Panhandle-Montour Connector and rode west on the Panhandle to Burgettstown, thinking I would go to Walden Family Restaurant, get some chow and warm up, and reverse. Discerning humans know that whenever a story begins with "what I was thinking was...", the original path will not come to pass.

Walden's was closed when I arrived, as the sign listing their hours clearly states. But now I was kind of in a jam because it was VFC (very f'ing cold) and I really needed to warm up before reversing. So I tried the door at the newly opened Shoppe Along The Way, a general store on the Panhandle Trail which was open, heated, and smelled like coffee.

Very nice people. I'll be back there again. I think they're in a perfect spot once springtime gets here. A fair amount of cross-country riders use the Panhandle to get to the Montour Trail, to get to the GAP Trail, to get to DC and eventually Yorktown, Virginia which generally is understood to mean the East Coast. I think The Shoppe Along The Way is in a good position.

But more than anything, I'm grateful that a business that was staring at closing time on a slow day, extended hospitality to a cold transient who was hoping to warm up.

The ride back was great. No wind, fortunately. It was dark by the time I was strapping the ECR onto the bike rack.

This afternoon's rain never really stopped as much as it transitioned into drizzle fo shizzle. Between the warm temps, the presence of a lot of melted-snow-moisture in the ground, and the low winds it was kind of a gray day and it turned into a bit of a low-visibility afternoon. Still, it was 45F.

I rode the LHT out to Five Points in Hopewell. I usually avoid Broadhead Road, because it's congested and single-lane, with lots of businesses but I thought it was more prudent than Route 51 with it's high speeds. So I rode Broadhead to Five Points, and it worked well. Everybody played nice.

I was so over-warmed when I got to Five Points that I pulled into McD to get a cold drink and cool off. Changed to lightweight gloves. I definitely should have been wearing a light (rather than a medium) wool sweater. There are two lasting truths: 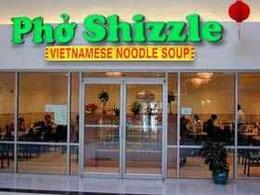 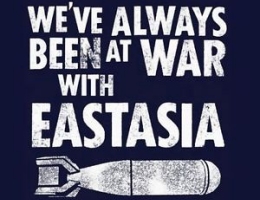