Parked under Birmingham Bridge. Rode through Southside, rode up past Station Square and West End Bridge to the scene of the accident. It's a very wide roadway; one lane north, two south, and a turning lane in the middle. There's so much room available for a protected bike lane, like we see at the Waterfront in Homestead.

Rode around town. Had an appointment in Shadyside. Rode over to intercept the Protest Ride in Oakland in response to the killing of Dennis Flanagan. It was raining, but it was a pleasantly cool rain and it was good to ride with friends.

The deceased's brother spoke with great wisdom. He said the family wasn't blaming the driver, as the facts aren't known. He said the driver is also damaged, having to know the rest of his life that his driving killed somebody.

After the protest ride, it was a dark ride in moderate rain back to the car. The sunset is happening earlier, it's the time of year to be getting more familiar with lights and night-ride gear.

At about the same time, cyclist Dennis Flanigan, 49 years old, was killed on West Carson Street at the intersection with the Busway. He was not killed by a bus, but rather in a collision with a red pickup. 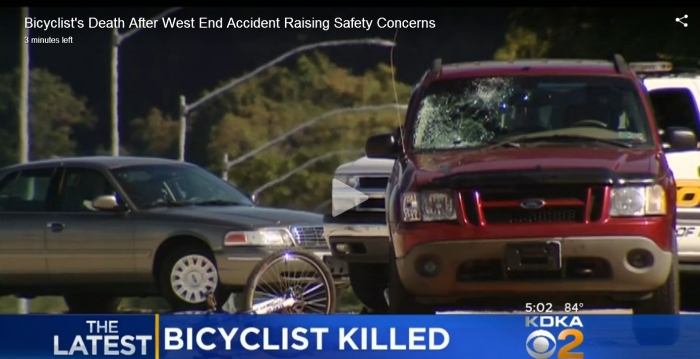 This road was closed for two years for a major overhaul, the kind a road only gets once every 50 years. A lot of people wrote to PennDOT saying, there needs to be a protected bike lane. PennDOT ignored all the input. Eight days after the road re-opened, there's a cyclist fatality.

The relatively-inexperienced cyclist was using the road as the new design intended. A more experience cyclist would have been in the lane, not crossing at the crosswalk to get to a sidewalk. Major design fail.

This is the fourth cyclist fatality in three years on Route 51. 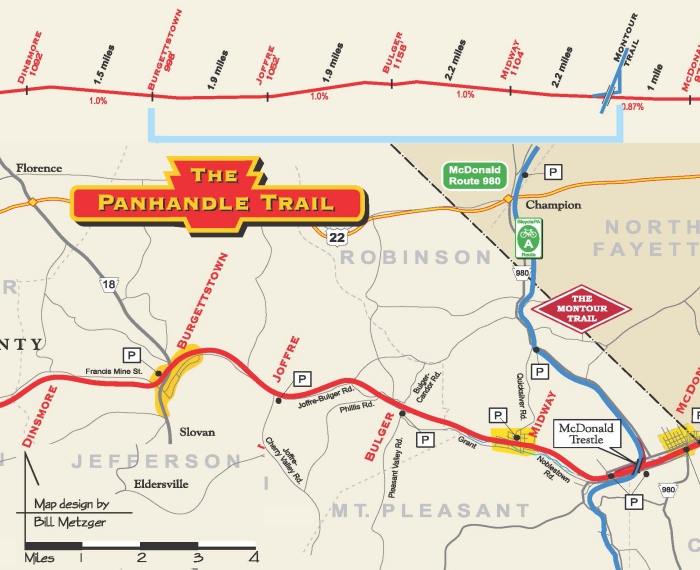 Walden's is a trailside restaurant. Very bike friendly; bike racks, they ask to fill your water bottles. The food is excellent. Today was omelettes and sweet potato fries, which are a specialty of the house. I've always had very good food there.

On previous trips, the trail was a bit sandy-soft in spots but it has recently been paved. PAVED. So awesome. It only felt like a 6 mile ride, instead of 8.

Also today, I replaced my Air Zounds horn with a Sabre Mobility Audio Alarm. I think it'll be just as effective for PWEB (people with ear buds) and similarly effective for People In Cars. It's certainly got a smaller footprint, and I prefer the battery power source over the compressed air can.

It must be said that her version of events is consistent with things other local artists have told me about collaborating with the MLK outfit.

The artist's intent was to deliver a depiction of Andy Warhol's Marilyn Monroe, but with the face of a black woman - which is a pretty great idea for a Pittsburgh mural.

The meaning of the wall was an Andy warhol inspired black girl. Who exists out of floating machine parts. Where the kids are part of it. I wanted to symbolize that each and single one of us are needed to make a machine work well. 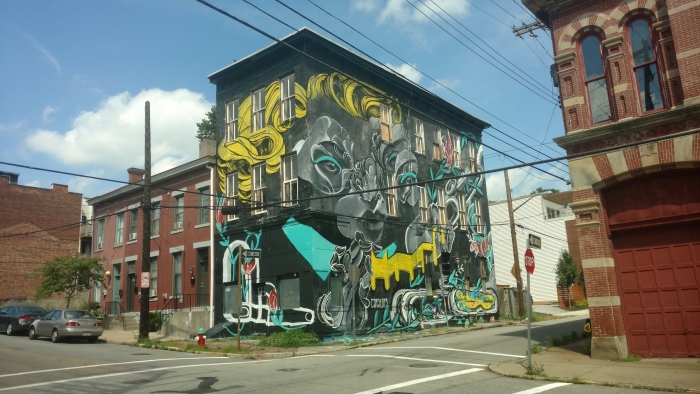 Friday 8.26 I got to ride with my friend KC. We started in Warren Ohio and rode north to Ashtabula. The route was a great, paved, level trail that's mostly got shade overhead. At the northern trail-head there's a great Mexican restaurant. It took us a little over six hours for 80 miles, which was my longest ride of the year. It was good to ride long with great company.

Saturday 8.27 I got to ride around Pittsburgh with two tour groups, one a business team and the other a group of first-year CMU students. Pittsburgh really shows well from the bike trails. Just a great day to ride.

These are my fave color belts in Pittsburgh:

I think these deer were playing Pokemon Go:

8.19.2016 35m
8.20.2016 6m
Aug mtd: 208 ytd:1372
Thursday I sat in on a trial of a driver for vehicular homicide while DUI, leaving the scene of an accident, and DUI. He had killed a cyclist close to where I live on Halloween, 2014. It was compelling to sit in the courtroom. The defense tried to poke holes in the prosecution's case, presented an expert witness to explain how it was the cyclist's fault, and claimed that since no rear reflector was found in the wreckage then there clearly wasn't a reflector on the bike.

The prosecutor was tremendous. He asked the expert witness, was the bike seat found in the debris? No. Do you think he rode without a seat? No. Oh, so not finding wreckage is different from it not being there. Then the prosecutor said, Do you think that the driver being intoxicated was a factor in the cyclist's death? The expert witness said: that's outside of the scope of my assignment. Nice guy, who established his credentials with being a LAB LCI.


Friday I drove with Karen to Meyersdale, PA. Climbed 8 miles to the Continental Divide, descended 8 miles to Frostburg MD, climbing a heart-breaking half-mile to Broadway and SHiFT, a farm-to-table foodery. OMG.

Karen had a corn-potato-OldBay soup, and I had chilled gazpacho. We both got salads. This is such a tremendous place. A bit of a climb up from the trailhead - I need to figure out a different approach. It doesn't seem necessary to start up on top of the mountain, descend to a point 500' below the main drag of Frostburg, then climb back up.

However, on the list of local supplies: Accident, MD?? Really? Can't we change that to Crash, MD or Collision, MD?

Rode back to Meyersdale. Found a voice message that the driver had been found guilty on all counts.

Stopped in Rockwood at the Rock House Inn. A completely different experience than the localvore chow we'd had for lunch, but we got pizza and wings and it was good. I'll eat there again.

Death of a Helmet #FDGB 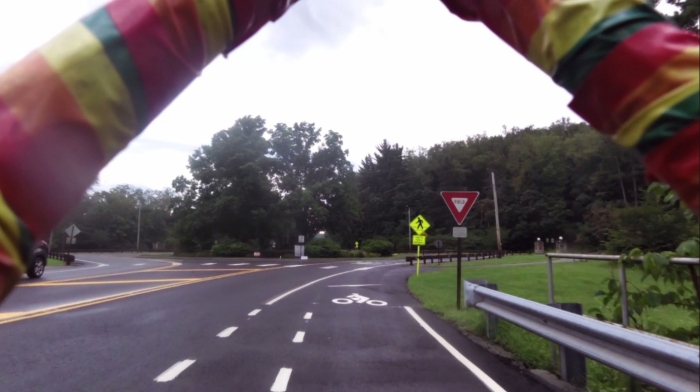 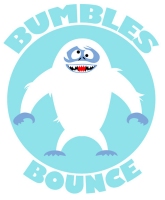 Tuesday Aug. 16 began inauspiciously, with me falling off the bike onto my helmet on Shady Avenue. Remarkably, there was nobody else around. I compressed the helmet and so that's the end of that. #FallDownGoBoom #BumblesBounce

Wednesday Aug 17, I was riding to an appointment. Detoured to SouthSide to look at helmets at Thick. Encountered Karen riding on Jail Trail. Went to OTB for bean cakes and shrimp tacos, very good. Got stuck in a heavy downpour on Ellsworth, took shelter under a hotel awning. There was another cyclist there too, although we only exchanged nods. 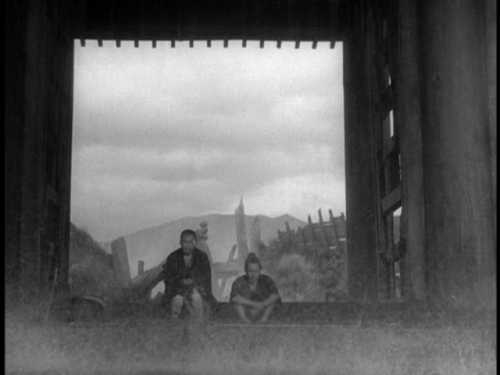 It felt a lot like the temple scene from Rashomon. Finally the other cyclist said to me, "My chain is broken". He seemed to be a student and didn't have a lot of English. He had a real nice Raleigh, probably from 1975-ish.

His chain had come off the front chainrings, and wrapped around the crank but it was jammed in place by a bolt holding the chainguard. Between my handtool and his being able to see (my glasses were all rain-spotted), we freed the change. Kind of a nice moment.

Friday Aug.12 I got to escort a group of sleep-apnea engineers around Pittburgh on a team-building session. Nice ride. My ride-partner Becky showed me a brilliant Pittsburgh piece of go-along-to-get-along High Viz: a terrible towel tied to the back of her CamelBack. Absolutely inspired; no Yinzer could stay mad at a cyclist flying the colors. 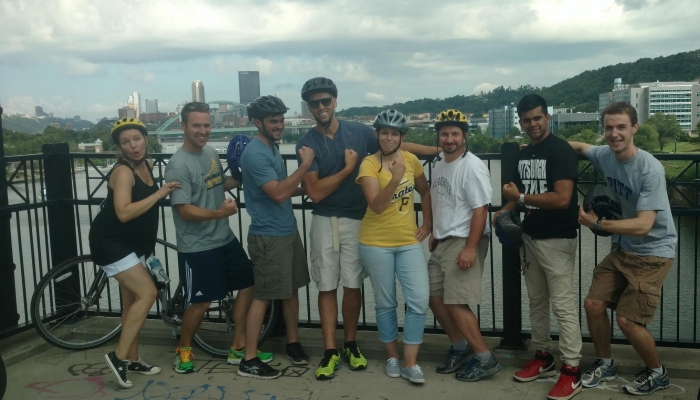 We stopped to take a look at the Pannier Building, site of the Union Paper Box Company fire of 1915, (more) which was Pittsburgh's version of the Triangle Shirtwaist Company fire of 1911.. In both cases, women employed in building with sealed windows and locked doors burned to death, or fell to their deaths.

Then we rode to Penn's Brewery and the Heinz History Center. Nice ride, great group.

Saturday Aug.13th I got to escort a group around the South Side. The visible homeless camps have been cleaned out, and the 31st Street ridge camp seems evacuated. Looks like the tents are back on Second Ave.

Nice campground, love the showers building. Decent cell coverage. If the campground only had wifi. 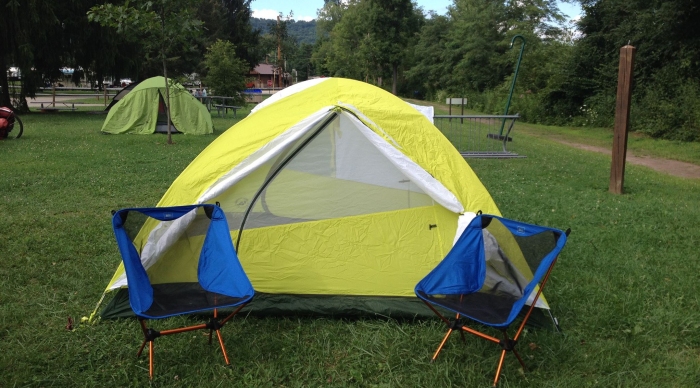 Another cyclist had an extreme ultralight shelter, I wish I'd paid more attention to it. It looked like the fly from a Cascade Design FlyLite, without the tent. I think he used his Flickstand instead of a trekking pole for support. 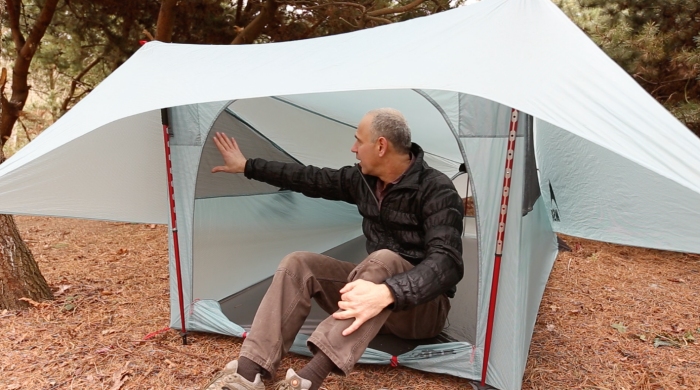 Aug 7 my wife Karen and I rode Confluence to Ohiopyle. Pepperoni roll at Ohiopyle Bakery, tremendous espresso's next door, and checked out the Backyard Gardens in the old Armory building. Noted that the former Firefly Grill is now an ice cream shop. 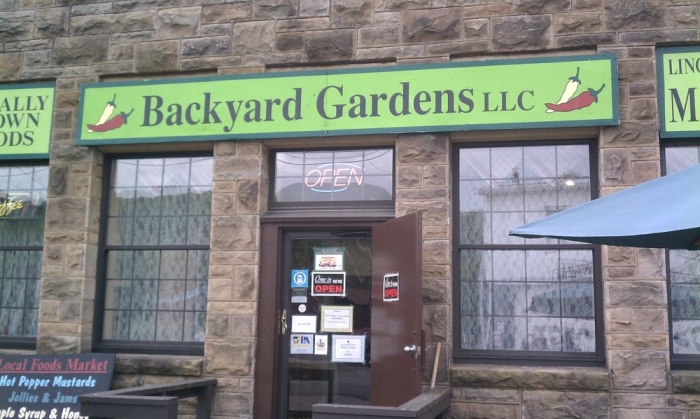 Trail conditions were excellent. Not too crowded.

Aug 8 I rode from Southside to Kennywood with Yale. Nice ride.