So, we've all seen the Brazilian car drives through pack of bikes disaster photos: 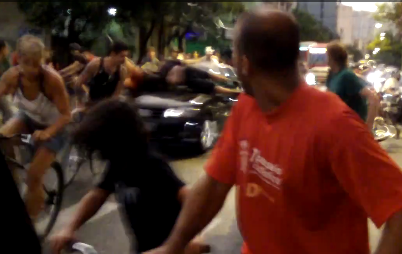 On a lighter note: 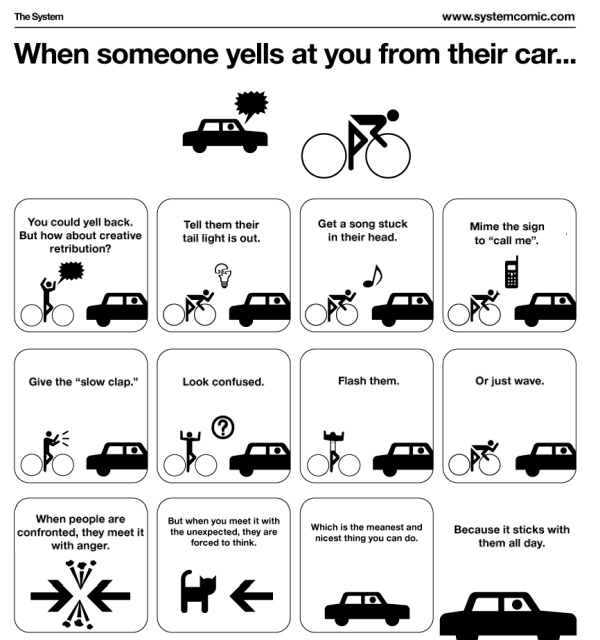 Rode 18 miles on the road today, ended in the gloaming darkness. Skipped the wool sweater, the balaclava, the heavy glittens, and the rubber booties.

Back In the Saddle Again

Rode 18 miles. Really a nice ride, but harder than I expected - the lack of recent miles was telling, I think.

The Better Half of Valor

I am a hedonistic procrastinator, in that I will put off a ride on a cold day until it is time that I have to go or I will lose the chance to ride. On today's lovely afternoon, clear skies after noon, I waited and pissed away my time until it was 3.15 pm, at which I start putting on all the clothing involved with winter riding. It had started to snow, and my Good Spouse said to me, "You looked outside yet?"

It was in fact snowing, and then it was snowing pretty good, and there was 1/2 inch on the ground pretty quickly. I looked at the radar on Weather.com and we were under a blue patch of snow, more dark blue than the white blue I'd hoped for.

I continued dressing, protested that I'd stay off the main roads, duly noted the SOFTR (Spousal Objection For The Record), and got out in the snow. There was about 3/4 inch on the road by that time.

It was a great ride, very quiet, no traffic. Down the first valley, up the first hill which is kind of steep, and that's when the fun started - the cars couldn't make it up the hill. They kept advancing slowly, then shimmied laterally for a while while sliding backwards on the hill. Some drivers kept trying it, allowing themselves to move more sideways, and other drivers seemed to put it in Park.

My trusty bike was doing well up the hill, and I just kept pedalling, but then as I approached a car that was alternatively stopped and shimmying I got off to walk around it. Got back on the bike, climbed up the rest of the hill, rode around a few cars that were stuck on the road.

I'm not sure why they were stuck, there couldn't have been any more than one inch of snow. Perhaps they had bald tires, but there were easily 6 or 7 of them not getting up that hill.

I thought about the shimmying they were doing in their 3000 pound cages and decided that for me, today, discretion was the better half of valor. I rode down the hill, up the valley on the other side, and made it home quite easily, although I saw a few more sliding cars.

It was a great ride, very quiet as it gets in a heavy snowfall, and the bike did real well. I only logged 2 miles, but I got to climb two good hills, and it was a small adventure.
at 9:12 PM 0 comments

Once Again Into The Breach

Beautiful day, clear blue skies, 65F, very windy. Rode 11 miles, I was glad to have glasses on because there was a lot of blowing dust with all the winter debris on the road.

Email ThisBlogThis!Share to TwitterShare to FacebookShare to Pinterest
Labels: windy

Ah, the sixties.
The 19-sixties are remembered fondly by aging hippies.
People in their 60's start to scare you when you're 53.
Temperatures in the sixties make for wonderful bicycling.

Rode the Eliza Furnace / Jail Trail to the Ft. Duquesne Bridge, along the Allegheny to Millvale and Washington's Landing, along the Ohio to the Penitentiary (and - why isn't that called the Other Jail Trail?), back to the Ft. Duquesne Bridge, across the Ft. Pitt bridge, the Station Square trail to Southside down to the American WaterWorks detour, back to the Hot Metal bridge to the trailhead.
at 7:51 PM 0 comments

Email ThisBlogThis!Share to TwitterShare to FacebookShare to Pinterest
Labels: sixties

Respite From the Cold 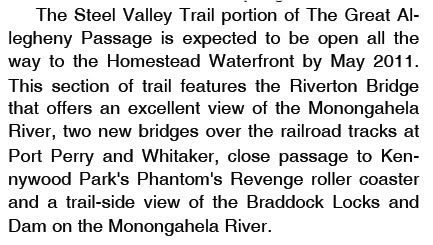 In case the image doesn't make it:

The Steel Valley Trail portion of the Great Allegheny Passage is expected to be open all the way to the Homestead Waterfront by May 2011. This section of trail features the Riverton Bridge that offers an excellent view of the Monongahela River, two new bridges over the railroad tracks at Port Perry and Whitaker, close passage to Kennywood Park's Phantom's Revenge roller coaster and a trail-side view of the Braddock Locks and Dam on the Monongahela River.

2/13/11 #229
From Dave Feucht of Portlandize, we get this really excellent homemade Burberry Rain Cape-- 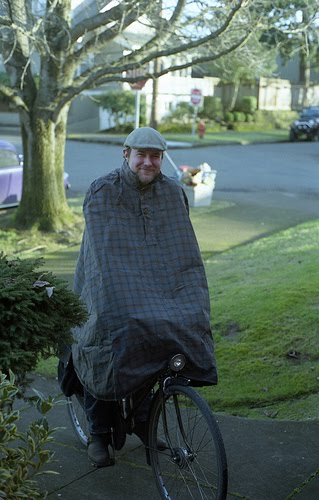 Rain capes are the ultimate in bike geek chic; they separate the merely aspirational from the true Freds (which is the accepted name for bike geeks, worn as a badge of honor).

Here's a picture of two Paris policemen in their rain capes:

Conventional rain attire, usually a jacket with hood and pants, has a problem: if it's waterproof to the elements, it's probably something that builds up moisture inside of the clothing as you generate heat and sweat. To many cyclists, then, the choice is which kind of moisture do you want to get wet with-- do you want to get wet with the rain, or wet with your own sweat? High-end jackets and pants hope to be waterproof in the front and breathable in the back to avoid moisture buildup, but nothing is as effective as a rain cape.

The rain cape protects you from rain by providing a form-fitting umbrella. They usually have cloth thumb loops sewn into them to keep the cape in position over your hands, and they also may have a waist strap to keep the cape close to your torso.

Any moisture that collects inside of the cape blows away because of the breeze passing by the open bottom. There are, to be honest, two three problems with rain capes:

Thaw on the 10-Day, Bikes in The Atlantic

Via PittGirl : A thaw on the horizon: Meteorologist Scott Harbaugh's blog says,

Temperatures will begin to rebound next week with most of the second half of February in the 40s and 50s for high temperatures instead of teens and 20s. The bigger storms will start missing us more to the north and rain will become the norm over snow.

It doesn't mean we'll be completely done with winter, but winter weather will become less of an every day thing and more of a couple of days at a time. I can't wait.

Bikes in The Atlantic: James Fallows is on vacation, so he's lending his spot on The Atlantic's blog to a few chosen substitutes, one of whom is San Francisco bike commuter Lizzy Bennett. That has to be a great national audience for a pro-bike writer.
at 7:41 PM 0 comments

Rode 11 miles, felt the loss of condition on the hills from having not ridden, enjoyed the ride all the same. 31F, w/c 24, dry and cloudy. 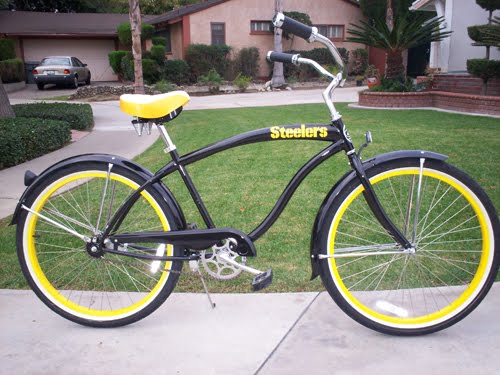 "Whenever I see an adult on a bicycle, I no longer despair for the future of the human race."
—H.G. Wells
at 8:05 PM 0 comments

My next statement will convince you that I'm not a genius.

Upon reflection, I've decided my weight gain is caused by:

Yesterday I picked up my newest bicycle geegaw: a Soho Commuter Mug, by Trek.

Yes, there is a bike called a Trek Soho. It's got a belt drive instead of a chain, that's sort of cool.

Yes, if you buy the bike it comes with the coffee mug.

Yes, you can just buy the mug. 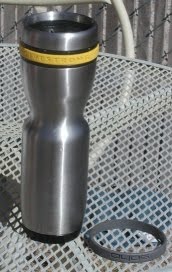 The mug has earned some good reviews, and the rubber strap around the top is reported to do a good job of preventing the mug from vibrating against the frame.

One blogger replaced the original gray rubber band with a Lance Armstrong wristband, because (1) it's high-viz and (2) it's more TrekLance propaganda.

I think he must have never heard of Rule 51:

Livestrong wristbands are cockrings for your arms. You may as well get “tryhard wanker” tattooed on your forehead.

I can only suggest that rather than use a "tryhard wanker" rubber band, you might want a Rule 5-type wristband:

I think the flat black color is more Ninja, and if anybody ever asks what it says, that's a sweet moment.

Of course for me, I might want to go with a blue wristband: 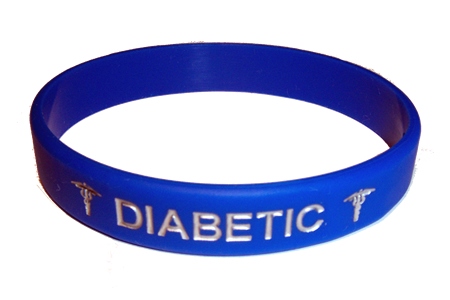 I'm looking forward to having a warm drink on a cold winter ride.
at 9:33 PM 0 comments

2/1/11
225#
On Monday I looked at the blue skies and the 30F temperature (wind chill 25), and the forecast of deteriorating conditions all week, and knew that this was The Day To Ride. I wrapped up the details of my day and at about 4:30 I started to dress, and it takes me about twenty minutes to gather and put on all those clothes, shoes, booties, balaclava, gloves, etc.

I'm out the door a little before 5 with the bike and my cellphone rings, it's an important call from a friend and I stop to take it, hanging up inadvertently a few times as my helmet straps press buttons. Finally, it's about 5:10 and I turn on my lights and start riding.

I hate that. At 5:15 there was no way to change the flat and get started before dusk, and while I'll start in daylight and finish in the dark, it just seems like another level of silliness to start riding in the dark.
at 7:57 AM 0 comments