Coffeeneur 2018-5 The Beehive in Southside


Nov.10, 2018. Picked up my LHT at world-famous Thick Bikes. They did a lot of work on it; a new beefy rear-wheel, replaced cables, new chainrings, new cassette, new chain, and they installed a new Surly-made plate to stabilize the kickstand. I highly recommend Thick Bikes. 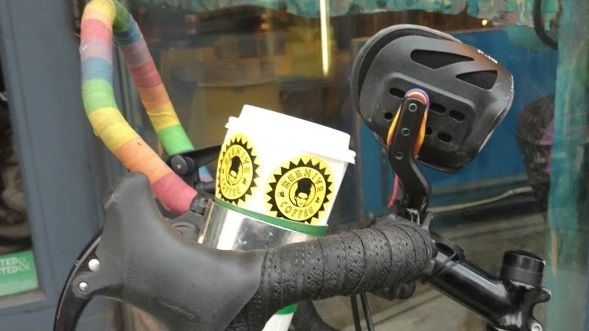 3.5 miles. Coffeenuring at Southside Beehive. The latte was above average. I generally really avoid the Beehive because there tends to be a persistent shithead factor in the crowd, mainly because they sell booze cheap in addition to good coffee. But on today's ride, it was the local indy coffee shop that was a natural, and I'd rather go there than Starbucks. There's something dissonant about Coffeeneuring and Starbucks. There is a bike rack around the corner. It's not a very secure place to lock your precious bike.

Had a Cafe Au Lait. Notably, this shop also carries Orem's Donuts which are like the best ever. No bike parking but generous sidewalk space; there are bike sharrow markings the length of town. Good wifi, lots of space. Recommended.

This is a photo showing the new Trekking bars on my Surly ECR:

It was a nice day, I continued further and checked out the ramp under the Cory-Neville Island bridge that's going to connect to the Montour Trail. There is no Montour Trail at the end of the ramp, although one can certainly discern the route and poke through there. 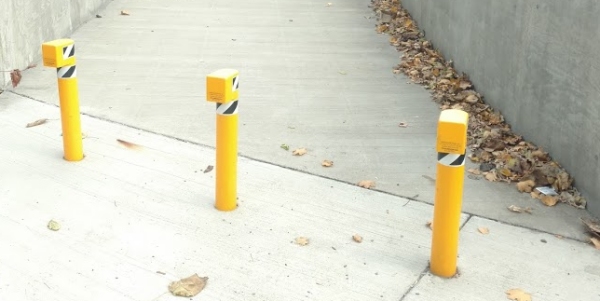 Today's was a nice level route and I experienced no discomfort.

On Saturday I parked my van at the former Western Penitentiary, aka SCI Pittsburgh, which is a lot less crowded than it used to be. Rode to the Jail Trail and Golden Triangle Bikes, dropped off a package. Stopped at Point State Park, and watched the world walk by for a while. While I did not get sick, I did not feel good and it is a great puzzle to me.

Monday I parked under the Birmingham Bridge, and biked to an appointment at Murray and Shady. I was distressed to get sick twice on the first leg, once on Boundary and once on Wilkins. The second and third legs, to Oakland and then back to Southside, went better but not great.


Monday's experiment was to wear overly large shorts, in case my bike sausage-casings were causing the discomfort. Factor One: ruled out.

Wednesday I rode from my residence to the local mall for a haircut, attempting to eliminate or confirm Factor Two: overheating due to too much hair. This factor is still OPEN. This was about 7 miles on local roads, and I am continually impressed at how well drivers behave out where I live.

Although I know one should never look up symptoms on the Google, it may be gastroparesis which is both a known outcome for some diabetics, and consistent with my experience.

I Blocked The Bike Lane But I Didn't Block the HOV

In response to Letter to the Editor, Washington Post: I blocked a bike lane. So What?, by Claudia Burke.

Yeah, all around in my home town
Homeland trying to track me down
They say they want to bring me in guilty
For the blocking of the HOV
For delaying the HOV
But I say Oh, no, no, oh

You can't delay the HOV,
sad commuters in their SUV
I blocked the bike lane just
for pastry at Au Bon Pain,
a quick stop at Au Bon Pain

Cyclists want to use my route
For what, I don't know
Every time they take the lane
I honk pull over so I can go
I say stop on red so I can go
(cry) I pay my taxes how 'bout you?

I share my road, it's got to be
I let Cars and buses use it too
But Scooters, Bikes and now Scoobi
They just won't let me through
My time is short, I must get through

[Chorus] I blocked the bike lane
It's nothin real it's just some paint
They say, that bike lane is not for me
And now this is a criminal complaint

Freedom came my way one day
And I drove straight outa town
All of a sudden I saw bikes (three!)
Intending to slow me down
So I hit, I ran them down and I say:
If I am guilty I will pay! 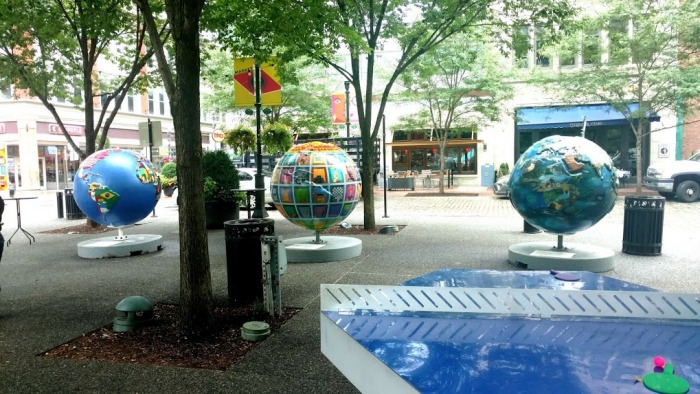 Went to Market Square, where there's a Cool Globes display on. Cool. Somewhat puzzled by the globe that put a Penguins logo on Africa, but: Pittsburgh.

Met R at Starbucks. Watched the world go by. Met (as agreed) MikeB and his scout troop from Severna Park, MD. Escorted them through downtown and out to the Hot Metal Bridge. It'll be a big deal when the Mon Wharf Switchback is open.

I really did not feel well when I returned to my vehicle. The route and conditions were not demanding. I'm not sure what's up.

5/18 escorted a tour group from the Renaissance Hotel to the North Side, the Point, and down to the Hot Metal Bridge. 12 miles. This was also BTWD, so I saw quite a few folks I knew.


5/20 rode with my wife Karen from Birmingham Bridge to Taza D'Oro in Millvale. 16 miles.