Sunrise was cool. Unfortunately, there was a big fire in the town of Mount Savage, which you can see in this close-up:

This very much reminds me of Pieter Bruegel's Landscape with the Fall of Icarus, in which tragedy is almost hard to identify in the midst of daily activity. In Bruegel's art, Icarus is making a splash in the bottom-right corner, between the galleon and the shore. 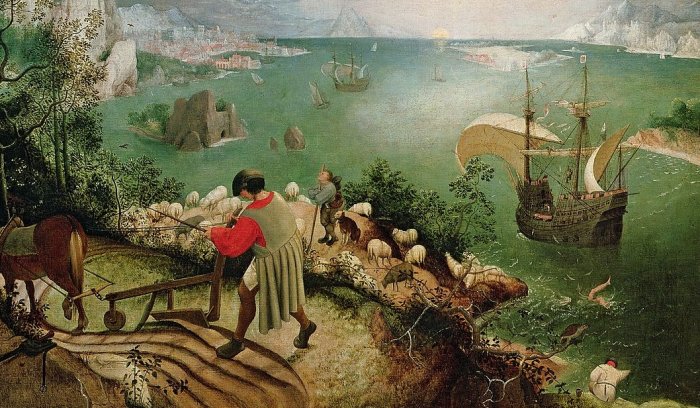 After breaking camp I rode back to the trailhead, got in the van, drove to Meyersdale for breakfast at GI Dayroom. I see a place with bikes outside and I think, My tribe is here. 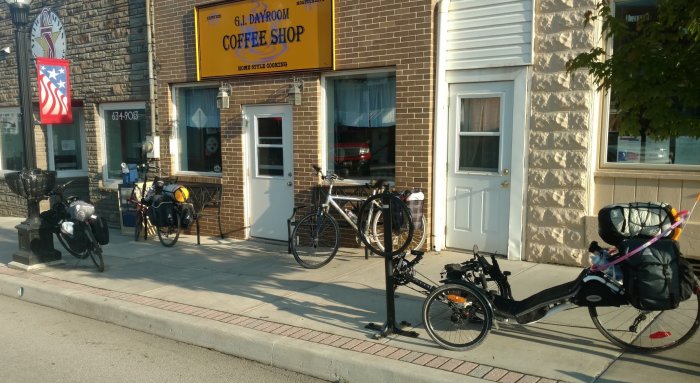 Parked in Frostburg MD. Used the Wifi at Mountainside Coffee to get some work done, then rode down to Cumberland checking coordinates of cross-streets. Saw this Snake, indulged the tendency to document it:

Riding into Cumberland, there's a bit of new bike infrastructure that removes the need for an at-grade crossing of a fairly busy street. Thank you Cumberland!

Wednesday I rode around Pittsburgh accomplishing small details. I did stop at Pittsburgh's nicest homeless camp and asked permission to take a picture. Bird-feeders! Carpet! Spoke with the resident, an eloquent person who invited me in and offered hospitality but I demurred.

Friday I rode with my wife Karen, McDonald PA out to Walden's Restaurant in Burgettsown PA via the Panhandle Trail. Trail conditions were excellent. And finally, let I take cycling too seriously, this comes from Pearls Before Swine:

Seen in the wild: a cyclist Facebook'd a photo of the gear they're carrying on the GAP, and my TrailGuide was included. Very exciting. 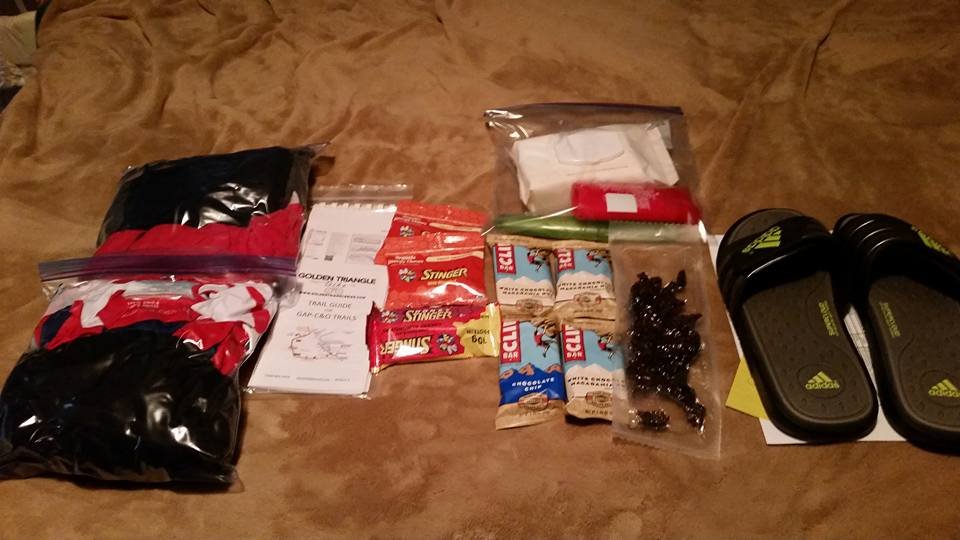 Friday I got to ride with a group visiting Pittsburgh for a seminar. This was the pre-ride photo, with a Honus Wagner photobomb going on. (Gerry stopped to take a picture, too)


After the tour, I ran a few more errands. Stopped at Gasoline Street Coffee for a macchioto, excellent. Very sorry to read that on today's Bike To Work Day morning shuffle, two cyclists (separate incidents) were hit by cars and injured.

Pittsburgh fails Bike To Work Day, 2 cyclists hit by drivers this AM. Standing by for PM. #BTWD @billpeduto @Bikepgh https://t.co/SIcclfXI4m

There is no reliable data on cyclist injuries or car-on-cyclist collisions resulting in injuries. Most of the cyclist-into-hospital crashes I know of, never make the media. We don't have any measurement of what's going on out there, it's all anecdotal and random.


I needed to send mail, so I rode to the Post Office building on Grant Street. Guess what? They've been closed for years. Big piece of empty real estate.

While unlocking my bike, I saw this flash of good spirit with a woman who was feeding birds. It's a funny piece of land, sitting forsaken between highway ramps going to Other Places, a hostile and barren taint of Pittsburgh that she worked her way out to in an act of kindness. Unknown Pittsburgher, I salute you. 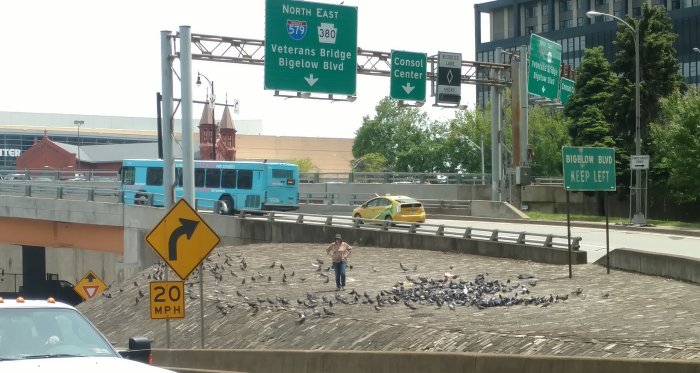 Riding through the Strip District, saw a significant police presence scattered around the area where there's been street fights between students when local schools let out. Saw two bike officers sticking their water bottles into a big white cube, which looked fairly Generic Borg: 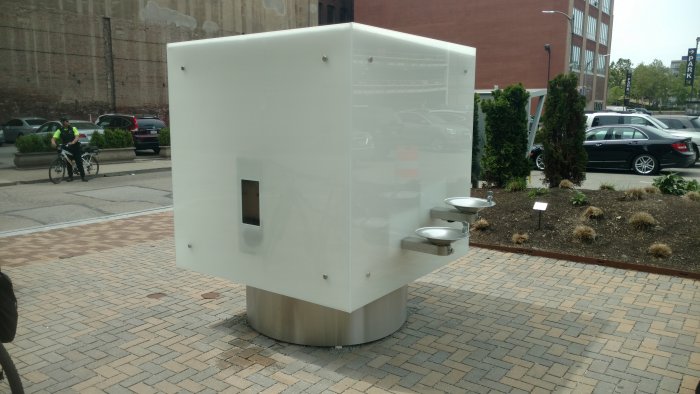 Turns out it dispenses water, and not just water: Seltzer water, "still" water, filtered water. This gizmo dispenses free, cold seltzer and if it's an alien spaceship or a DHS observation post, I love it anyway. Cold, free seltzer.

Nice ride for me; pretty weather and went all over town. The two cyclists struck and taken to hospital sucks.

After leading a lot of bicycle tour groups from Pittsburgh to DC (and DC to Pittsburgh), and in conjunction with Golden Triangle Bike, I've developed a Trail Guide for the GAP and C&O trails. The purpose is to help you navigate the trails from Pittsburgh to DC, help you maintain situational awareness while you're adventuring, and help you make informed decisions as events arise.


This package of route charts, drilldown area maps, and addresses with GPS coordinates will fit easily in a bike jersey pocket or a handlebar bag and is designed to avoid information overload.

The Trail Guide is designed by a cyclist, for a cyclist riding the trail; it's not a car map. Our Trail Guide is an artisanal cartography project. We've curated and hand-assembled it to deliver important information while avoiding the non-essentials. We think it's better than anything else; you'll find it delightful and useful.

There's a lot of up-front information before you begin the adventure, and you'll learn a lot enroute. This Trail Guide lets you bring along expert insights to reduce uncertainty and make a satisfying experience more likely. When you consider the cost of your trip in time, schedule blocking, and cost — it's a smart investment.

5.09.2016
36m
mtd:90 ytd:630
Great day for a bike ride, although it got colder as the day progressed. Got to ride with Jim and Julie from UncoveringPA, which was cool. We rode Southside, Northside, Strip, and downtown. Used to be, taking some visitors on a bike tour, you'd have at least one moment where a driver was rude - not so much, anymore. Cycling has arrived in Pittsburgh.

Saw this by Jeremy Raymer at Cupka's 2 Cafe: 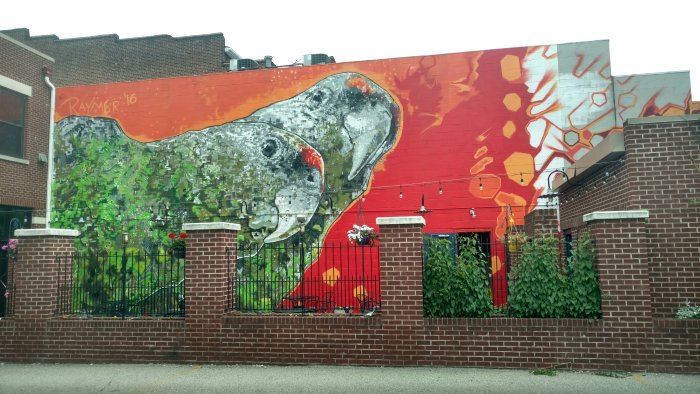 Saw this by Barron Batch at East Carson and 24th: 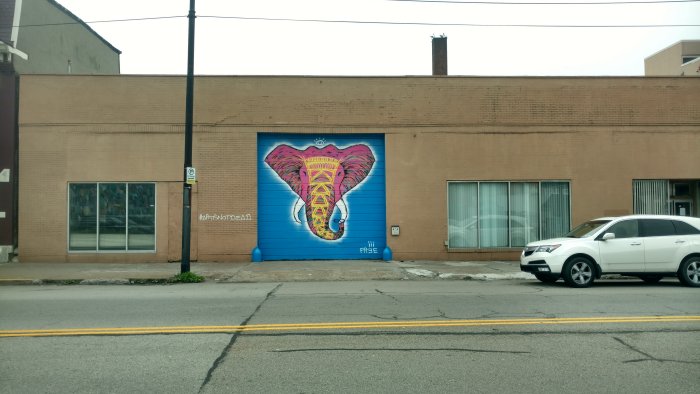 Arbiter of the Trail Binary

5.3.2016
27m
mtd:54 ytd:594
Camped overnight at Yough Canoe Outfitters. It was about 45F and heavy rain. I love my tent and my sleeping bad (both Big Bertha); I was warm and dry. There is a good deal of train noise and train whistling to be heard.

Woke up and the world was wet; went back to sleep. Pedalled over to the Chuckwagon for breakfast. Broke camp, rode back to the Waterfront.

Saw this sign in Boston, PA; not sure if it's a new offering or a legacy artifact. 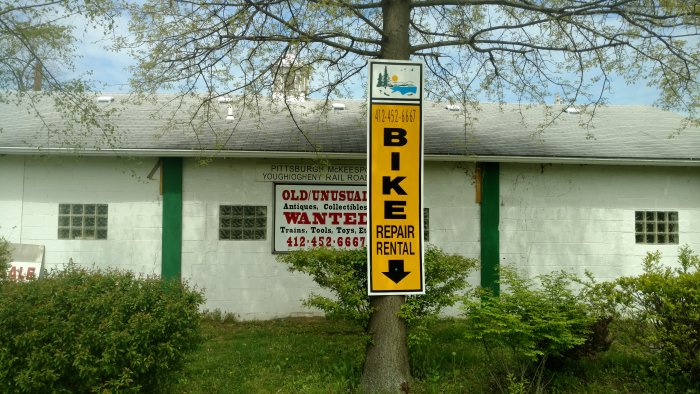 Met Y and Paul, who were working on a small landslide below the Kennywood property. As we talked, an older gent on an electric scooter approached and rode by. The question of electric scooters on the trail sometimes comes up, and probably will come up more often until their use becomes mainstream. 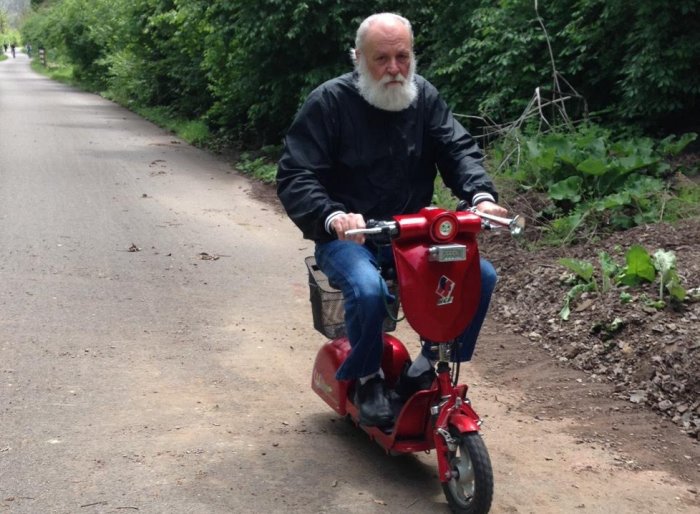 I think it's analogous to the few people in NC who stand around bathrooms, ensuring that individuals going into the bathrooms go into the one which they (the would-be arbiter of gender) think is the right one. I don't like those people, the self-appointed gender-binarists.

I'm going to apply the same guidelines to e-bikes and scooters on the trail. If they think they belong, then welcome to the trail. I don't think I'm the arbiter of who should be on what bike.

5.2.2016
27m
mtd:27 ytd:567
Parked in the Waterfront. Met Y at the Pump House, rode south-east to West Newton. I was amazed to learn that there are traffic counting sensors along the GAP, placed in innocuous No-Fire markers.

It looks like some work is being done in McKeesport at a small building reportedly being developed as a hostel.

Met the new owner of the Boston, PA peddle-and-paddle shop. He said they're going to emphasize more paddle, less pedal. Also learned that the Boston Waterfront restaurant won't be opening this year, after an off-season flood. It's a tough year for restaurants along the GAP (Sweeties, Sherman's, Boston Waterfront).

Noted there's a second Adirondack shelter being built at the Dravo Cemetery campground, and a big pile of split firewood.

Camped at Yough Canoe Outfitters, which I've passed many times but never visited. $10 to camp, $5 for a shower. Very nice people. Invited me over to their office watch the hockey game later in the day. The campground is a grassy field adjacent to the boat launch. It's both great and basic: it's a field, a porta-potty, showers in the main building, and Wifi in the campground (which I appreciate).

Dinner at the Trailside Inn.