Sunday I rode from the North Side into East Liberty with my wife Karen, then I bopped over to the South Side myself to join my friend TimM for a celebration of the Easter Rebellion. 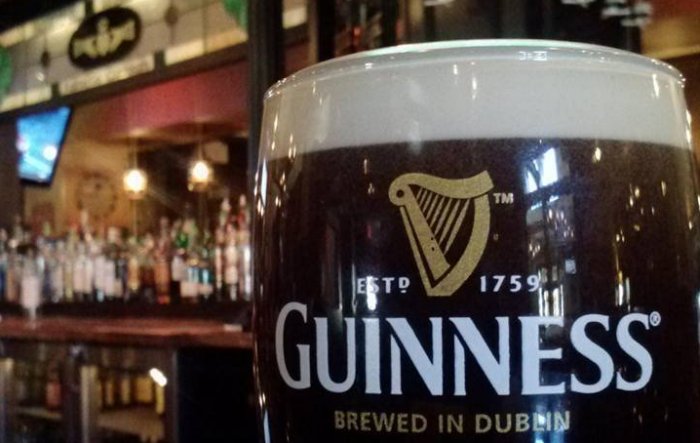 I must confess that the pints seemed to weigh on me as I climbed back to East Liberty. Rendezvoused with K, met a cyclist rocking a Dutch-style bike with a safety lollipop - only the second one I've seen in Pittsburgh. Rode to OTB, had dinner, RTB.

Tuesday was primary day, so: things you can do with a Pizza front rack: 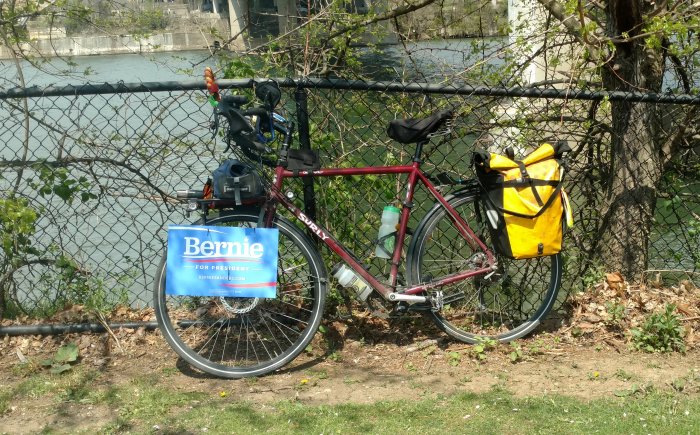 I met YaleC and got the Manchester segment of his North Side Tour. I really liked the Wayfinding system at this Tiny Free Library at Manhattan & Hamlin Streets: 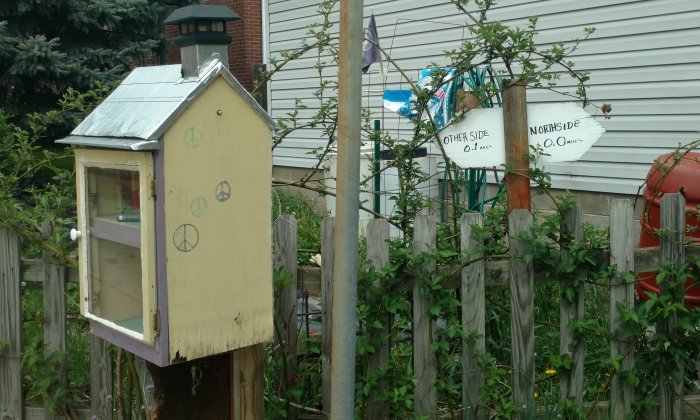 From Manhattan and Juniata Streets:

Fascinated to find three Baptist churches at the same location:

In Manchester, Yale showed me the high water mark from the 1936 St. Patrick's Day flood: 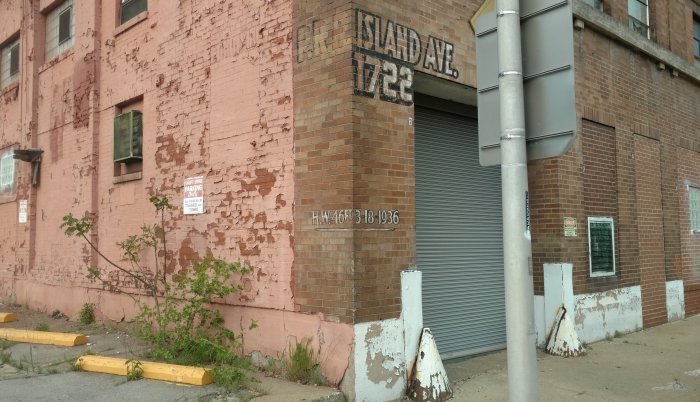 Not as pronounced as the markings at Klavons, but still remarkable.

Tuesday I parked by Peggy's Marina, rode into Pgh to pick up some materials at a printer's, rode to Golden Triangle Bike, rode to the Point and back to Millvale.

Wednesday I parked in Millvale with my wife Karen. Rode to Oakland, rode to downtown, back to Oakland. Tremendous day.

Thursday I met MarkC and we rode through the strip district. Picked up some olives at Salonika Imports, rode through Lawrenceville and sat outside of a coffee shop, drinking espresso and eating olives, living the dream.

We stopped at Thick Bikes. I love those folks. I needed a small, steel L-bracket which they made for me. Great shop. Also, I really liked these water bottles: 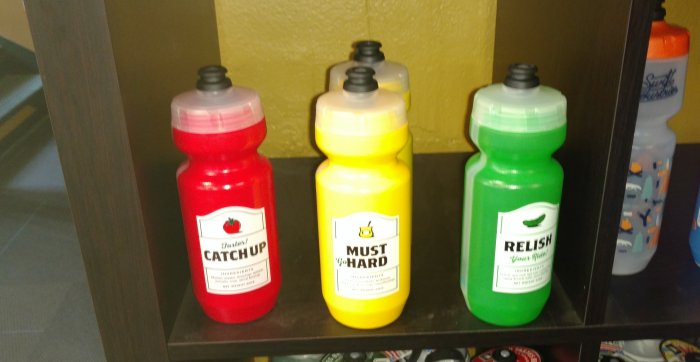 4.16.2016 25m Conf-Ohiopyle r/t
4.17 38m Conf-Rockwood r/t
mtd:88 ytd:421
Spent two days based in Confluence, PA, at the Outflow Campground. This is a very nice campground; on Saturday night it was quite full, and on Sunday it was only lightly occupied. Bike-in camping is $5/night until May 1st, which is a great deal. Real bathrooms with hot water; the showers building opens on May1.

Saturday I rode with BillM from Confluence to Ohiopyle and back, and it was a real treat to ride with somebody who knows the local history. He'd point out a pile of timbers and earth and explain that it was used to dump small carts of coal into trains below, stuff like that. Saw that there's a Duro-style tool workstation at the Ramcat trailhead now (so cool).

BillM is the most courteous of cyclists, offering assistance or information to others widely, but as we were riding his voice went kind of deep and he said to me: "don't make eye contact, don't speak, definitely don't stop" and when I'm in somebody else's neighborhood I listen to them. An opposite direction cyclist rolled by with something on the back of his bike that to me, looked like a portable ADF antenna. Later in the day, I saw the good folks at Confluence Cyclery took a picture of his rig: 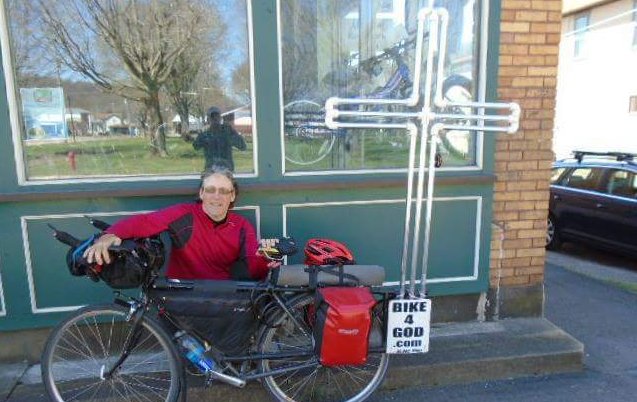 Bill shows me trillium, and skunk cabbage, and an avalanche tube, explained how the remaining big rocks were all sandstone that didn't erode, and showed me a parking spot for a draisine which was very cool.

It seems like Confluence has a few restaurants that won't be opening in the spring- Sweeties and Shermans, for instance. The overnight at Confluence's Outflow Campground was very quiet after around 9pm.

Sunday I rode up to Rockwood, had lunch, and reversed. Saw this cyclist on a penny-farthing. 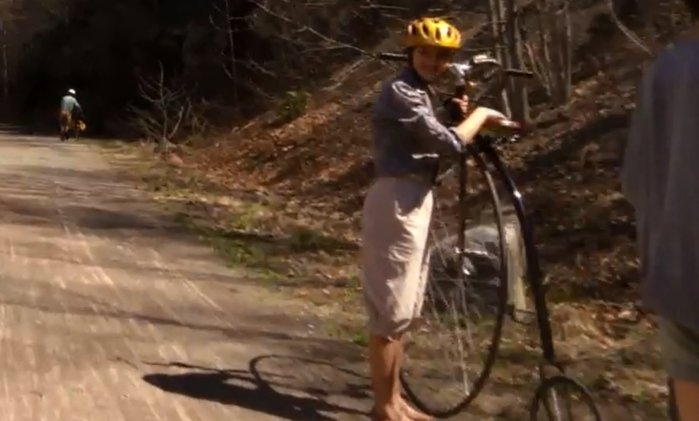 I love the Pinkerton Tunnel. I do think one of the portals would be a great place for a tools workstation; it's in the middle of so much nothing. I also learned that these posts in the Confluence campground are for hammocks; very cool.

April 12: Point State Park's fountain is back in operation.

April 13 was a funny day, with Trump events, helicopters, closed streets. I stayed mostly in Bloomfield and Shadyside.

I did see this new artwork at 608 S.Millvale's SideWall Project called Progress by Marlana Adele Vassar. 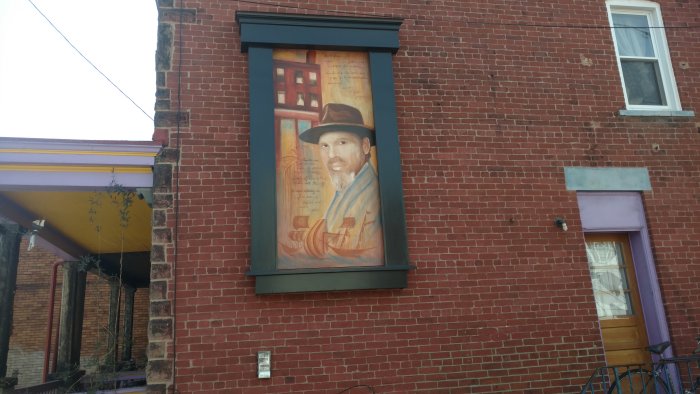 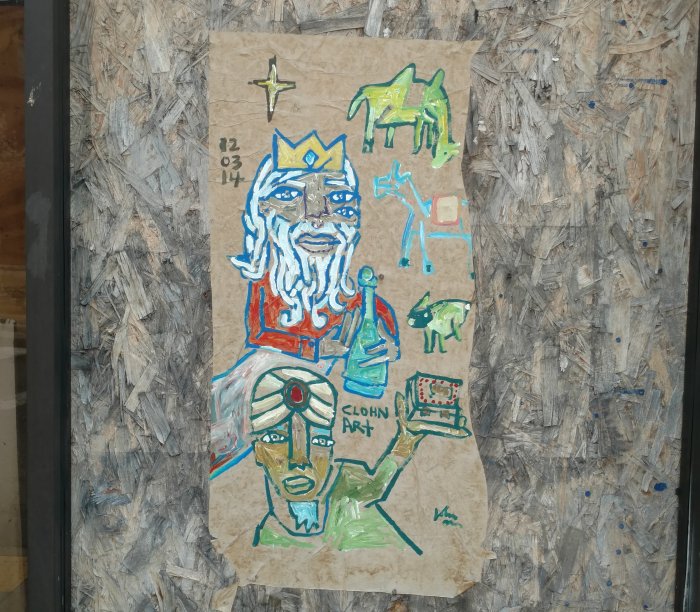 Stopped at 4121 Main to obtain some more Ashram Afternoon tea, which is wonderful. I was kind of surprised to see bike jerseys and a bike in a nearby storefront window, so I walked over to 4124 Main and discovered (in a Columbus sort-of-discovery) Analog Forest, which was completely unexpected and "new to me".


Photo of my bike at The Bastille, aka Pittsburgh SCI, f/k/a Western Penitentiary (and not West Penn, which is a hospital). I think I'm going to stop using this as my default trailhead, there's a lot of bad energy around prisons. 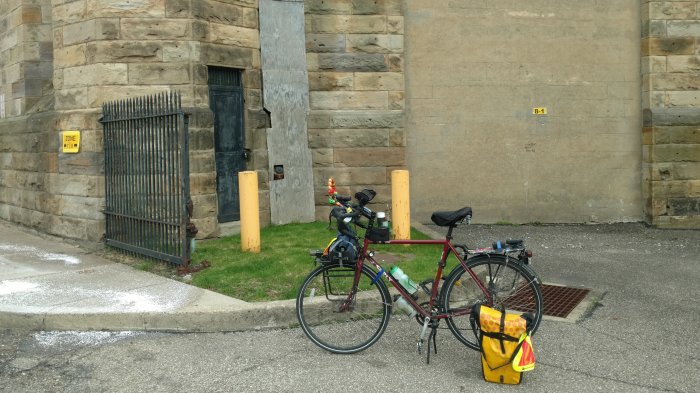