Rode out to Pamela's for strawberry crepes. Back to the 16th Street Bridge, Grant Street, Hot Metal Bridge to REI for some supplies. Return via Smithfield St. bridge. All the cars were very copacetic.

Then we reversed and rode to see the Valleybrook Road bridge project, which has the concrete deck poured and they're installing the side beams. More infra goodness.

Continued down to where Farmhouse Coffee used to be (sigh) and went to Starbucks instead. A very nice day for a ride, I was surprised how many bikes were out on the trail.
at 10:03 PM 0 comments

Greiving the loss of Persephone

Later in the day, rode into East Liberty to pick up the audio trailer for the Flock Ride. Carried that around to Dippy.

I ended up in front of the Flock ride but didn't know the route, but J. kept me on the path. I was a bit sad when we rolled from Larimer into EastLiberty because the house that my favorite Pittsburgh mural was painted on has been demolished to make way for new housing. 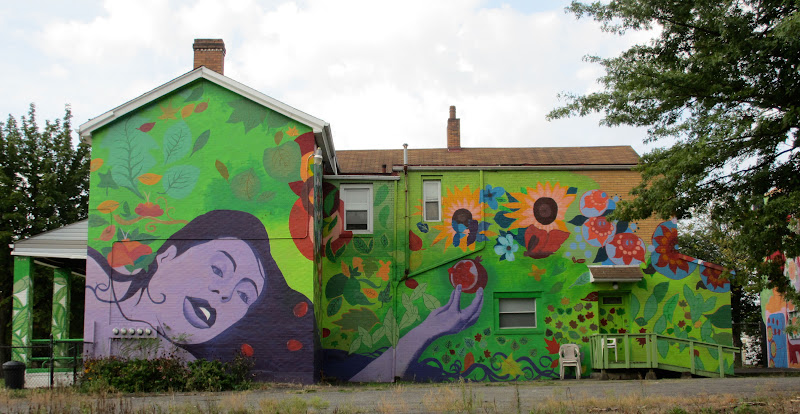 The mural tells the story of Persephone, who got into trouble putting seeds (pills, if you will) into her mouth due to great curiousity, even though she knew she shouldn't. I really liked this whole-house mural.

I think the remembrance of Stuff That's Gone is a uniquely Pittsburgh phenomenon.

Monday July 13. Started at the Bastille. Rode to an errand in Uptown. Took Armstrong Tunnels to South Side, stopped at Thick Bikes and was very pleased to see the new space is open for business. It's a Soft Opening at Thick! Excellent shop, I hope they thrive in the new space. 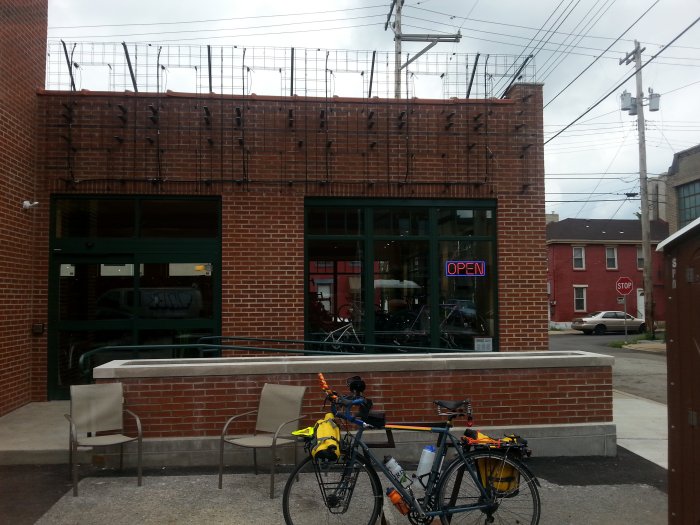 A Much-Needed Day of Rest

July 5, 2015 25m
It's been 12 days since I rode my bike. It was also seven days since I've slept in a bed - and I missed the bike much more. I rode from my sister's house in Wantagh NY down to Jones Beach. I was following a group of cyclists who seemed pretty sure of where they were going when they turned onto a bike path I didn't know existed. new stuff!

This trail starts at the Jones Beach Monument and runs east for 3.5 miles. It is most excellent. (there's a plan to extend it further east) At the end, there's a fence with a subway turnstile to keep bikes out, which is a bit unfriendly I think. On the other side of the turnstile there's a snack bar, restrooms, and a wooden frame with a bunch of water spigots so I poured cold water on my bike sandals and toes. Coolest thing ever.

Saw a combo-kite: a heavy-lifting kite on the top of the rig, holding up a kite-sculpture of a horse. The horse's legs and tail move around in the wind, giving the impression of galloping.

This is a picture of my Trek830 in 2005, when my Dad was fighting cancer, with the Jones Beach Monument in the background. I gave this bike away in Spring 2015 to Bill Haley.

Took a picture today of my Surly LHT with the Jones Beach Monument in the background, while my Mom is recovering from cancer surgery. I'm beginning to develop a negative association with this Monument. 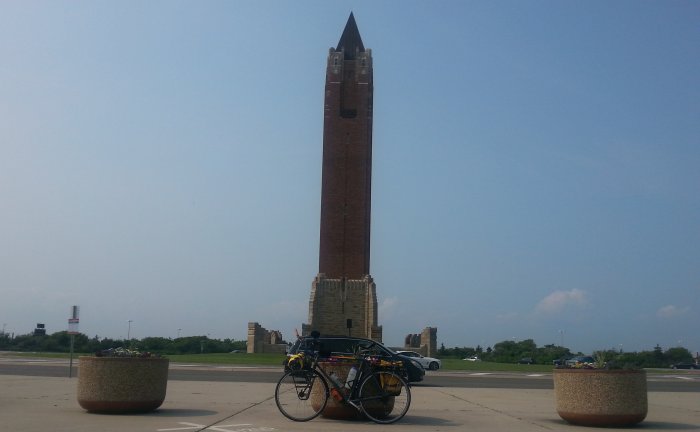 I often joke that when bicyclists get access to a new place, or some new infrastructure, it takes about 3 hours for a cyclist to ask: yeah, but can we get some wifi in here? So I was very pleased to see that Jones Beach has wifi on the beach: