Seeking to avoid the remaining ice turds, we crossed into downtown and rode outbound to the 40th Street Bridge, then crossed the Allegheny River again to the north shore. Arrived at St. Nicholas' Churh in Millvale at 12:57, just in time for the last tour of the day. (They're at 11, 12, and 1pm Saturdays)

The Maxo Vanka murals inside of St. Nicholas' are remarkable. They depict Croatian-Catholic imagery along with comments on war, industrialization, and capitalism. Amazing stuff.

This is my favorite panel, depicting a wealthy financier of 1941 reading his stocks at the table - while a poor man grovels for scraps under the table. (not shown in this image)

The docent's briefing is really excellent, they point out a lot of things I'd never recognize on my own. Highly recommended. Free of charge, but they accept donations for the preservation of the murals.

When in Millvale... Pamela's Rode into town and over to Pamela's for strawberry pancakes. Found a newly mounted bike rack: 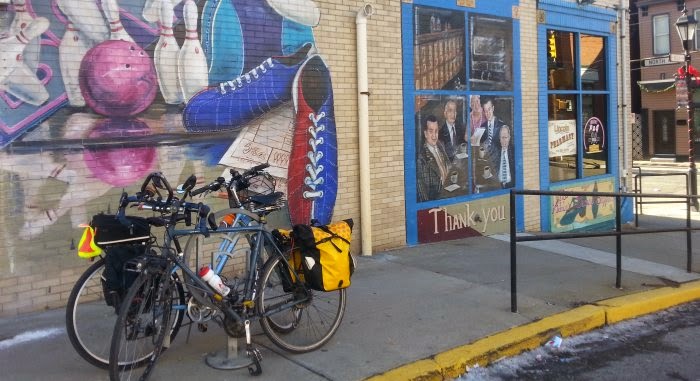 Back on the bike. Used the sidewalk (rather than the fugazy bike lane) up to the 40th Street Bridge. Rode inbound, stopped at 35th and Charlotte to see Mr. Raymer's newest artwork: 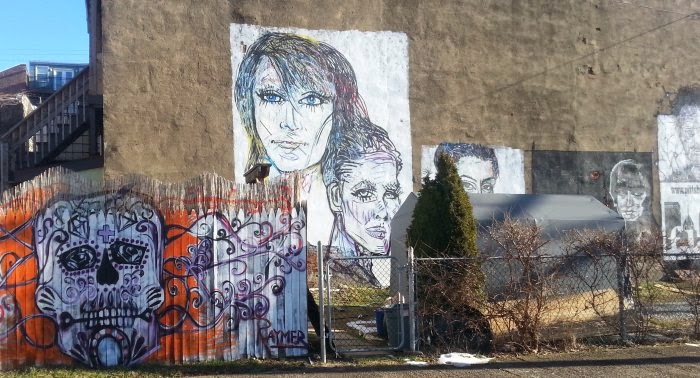 Rode to the Hot Metal Bridge and over to Thick Bikes. I wanted a thingy to mount a light, they had exactly what I needed. I love a bike shop where you can say, I need a thingy and they accept that as a valid request. 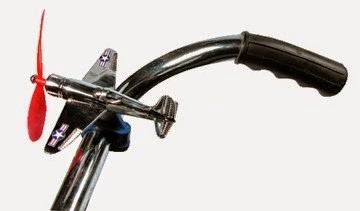 Later in the day, one of my top-two-favorite progeny gave me a bike-gift, a little airplane with a big spinner in the front. This is very cool, plus it's always great when you realize your kid gets you.

I have thought of placing a small windsock on my bike to show the relative wind, or maybe a bit of ribbon like sailors put up on the top of the mast.

1.15.2015 24m 30F
A 9-day interruption of cycling ended today, not a moment too soon. I was despondent, depressed, morose, and approaching lachrymosity.

It was so good to get back on the bike. Started at the Bastille. Trail conditions were good. Took this picture of the Koi Pond by the dockmaster's house. 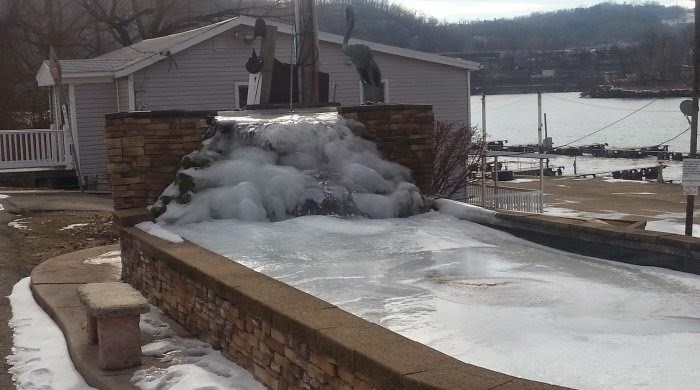 Cross-town, Jail Trail, Hot Metal Bridge: all good. Schlepped over in the direction of Thick Bikes to see what's up. Around the corner from Thick, I found an unexpected mixture of the divine and the droppings, eschatology and scatology. 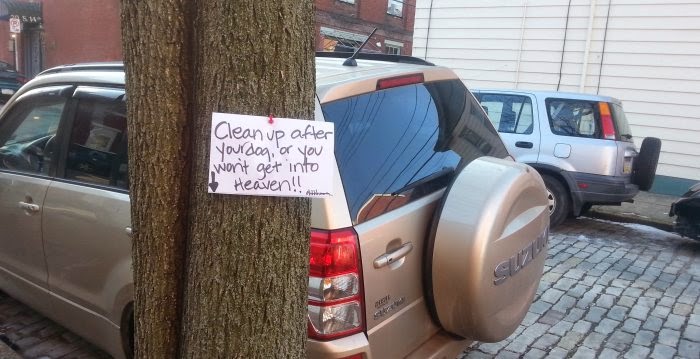 Imagine the waves of change that could come from this:

Everytime somebody tells me, my aunt's boyfriend knows a cyclist who doesn't stop at red lights all the time, I'm going to ask them why do you Yinzers think the Pittsburgh Left is legal? And I'm sure that will help.


Rode out toward Sandcastle, but turned around at the perimeter of the Valley of the Shadow of Eagles because the permashade from the hillside has the trail all icy and rutted. Saw Mikhael, always a treat. Hot Metal Bridge, Jail Trail, Penn Ave Bike Lane (out and in, because it seems like an obligation).


A very nice and much needed ride.

Lance Armstrong and Steven Spielberg it's not

1.6.2015 2m
Today was a cold day, warmed up to all of 18F in the afternoon. I didn't need to be anywhere but I've installed some gear on my bike that I really wanted to try out, and the next two days don't promise to be as nice as today.


I have really wanted to be capable of recording video during rides, mostly to capture the unlikey perpetrator of my death. I really hope I'm wasting my money; I don't need to make this an effective investment. 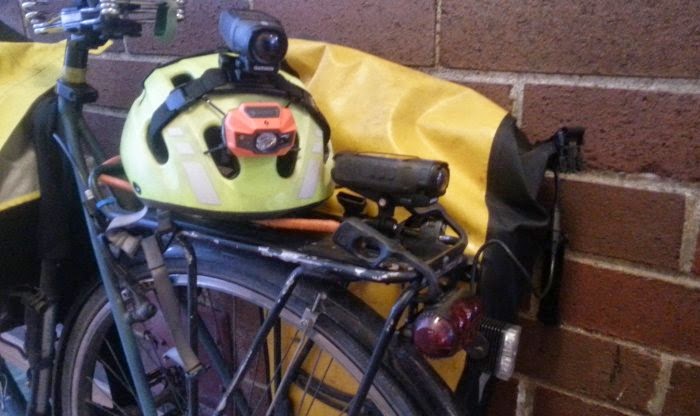 I have purchased two Garmin Virb cameras (rhymes with verb, as in action-word) and mounted one on my helmet and one on the rear rack. I've just really wanted to give these a try.

This is a brief view of the front-camera. No excitement, although an overtaking car does pass me about 1 minute into it.


This is the rear camera from the same ride segment, with the same cars passing.


I learned that I have my helmet cam on the front of the helmet, and that the weight of the camera brings the helmet down to rest on my eyeglass frame - which exerts pressure on my nose in an uncomfortable way. So my next ride I'll have the camera mounted top-dead-center of the helmet.

I like the helmet mount as opposed to a handlebar mount because it shows the rider's perspective. Not that I'm reluctant to mount anything on my handlebars.

It seems like Garmin must be phasing-out this model, the price is down to $99 apiece. With the memory cards and a helmet strap I've got $290 in this.

There's some Garmin freeware that lets you crop the videos and overlay some GPS data. I'd like to learn how to present both the front-and-rear perspectives simultaneously.

Edit to add:
I learned you can do picture-in-picture using iMovie 11 and fortunately my wife K has a MacBook Pro with that software. Here's a look at the car overtaking from behind in the small window (top-left) and then emerging into the forward view:


What does one miss out on, if you purchase the just-obsolete Virb ($99) rather than the Virb Elite ($250)? There are some significant differences. The camera (lens, battery, structure) is the same. The Elite has an on-board GPS to record your ground track, auto-stablization software for your movies, and a software levelling adjustment to calibrate your camera to the horizon (in two dimensions). Also it's got wifi, so when you bring your bike-with-camera into the house you don't have to detach the camera to download the images; they whoosh across the ether with the speed of WiFi.

Small disappointment: while the Virb Edit software will present your movie on your device with an additional map presentation, you can't export the map-in-movie. The map info comes from Google or Bing, and Garmin isn't paying for the IP license. Which I totally get, except for: isn't Garmin a mapping company? Kind of lame for them to say, we don't have any maps especially when they could access the OpenMap project. This is a minor kvetch.

1.2.2015 29m 32F
Rode from the Rez to Sewickley, had a few extra minutes and extended the ride through Glen Osborne - which I only Columbus'd a few weeks ago.

It's a very nice neighborhood, looks like Olde Money, very bike-conducive. I like the coat-of-arms on the street-sign (above) and with a little work, that wagon-wheel or ship's-helm thingy could be a fat bike tyre.

From the Glen Osborne website: The Borough's motto, "Consilio Non Impetu," translates from Latin as "Wisdom, Not Impulse," which we think is a good rule for a government to follow.

Reversed into Sewickley, met some friends for coffee. Emerged into major darkness around 7pm and really enjoyed the dark ride home. All the cars were very courteous. One opposite-direction pickup truck paused at a stop sign as I approached. They rolled down the driver's window and asked, "what is that?"

Little moments like that tell me I've got enough lights running. I love those moments.

Today I was traveling, but was invited on a short ride by my young nephew. Great to ride around with a kid, they still have all the joy in their riding. 2 miles.