Sunday 5.24, rode from the Rez to Geneva College at the top of College Hill. Then rode to Bruster's for ice cream.

Mon 5.25, just a short ride on the Montour Trail from the Schmidt's trailhead out to Boggs, my favorite Montour trailhead, and back. Got to see Dan and SarahQ on the Pittsburgh Randonneurs riding the Montour Loop.

Wed 5.27, started on the Montour Trail at McDonald Trestle, rode to the McMurray Starbucks. Got to see the new bridge projects at Route50 and also at Route19.

Sat 5.30, started in McDonald with my wife. Rode out to Burgettstown and Walden's Trailside Restaurant, reversed back to the vehicle and got back in the van just before the heavy rain started.

So bumbed that in three weeks the days start getting shorter.

Driscoll's near Dravos for Dinner

Thu 5.21.2015 47m
Fri 5.22.2015 39m
Departed from R's abode in Cecil near the Montour Trail, and headed south and east along the less-used connection between the Montour Trail and the GAP. Got to see the new bridge being built at ValleyBrook Road, very exciting.

Also got to ride the bridge across Route88, even more exciting. The trail on the eastern edge of the bridge is rough but it's going to be a fantastic connector. At the end of the trail-trail in Clairton, we followed the signs for the Montour Connector to the GAP.

The signs are newly placed and so much of an improvement. It really isn't challenging (now) to get to the GAP from the Montour. We rode Clairton and Glassport (which has recently repaved most of the roadway, smooth as butter) and then took a new route at the McKeesport Bridge.

Previously I'd always crossed from Glassport over the McKeesport Bridge, then rode the McKeesport road-trail down to the PortVue bridge. Now the signs direct you along Liberty Way and River Ridge Road and you never need to ride through McKeesport or cross the bridge to PortVue. It's a two-lane road, no shoulder, with big trucks but everybody was super-sharing. The new signage is really quite an improvement. 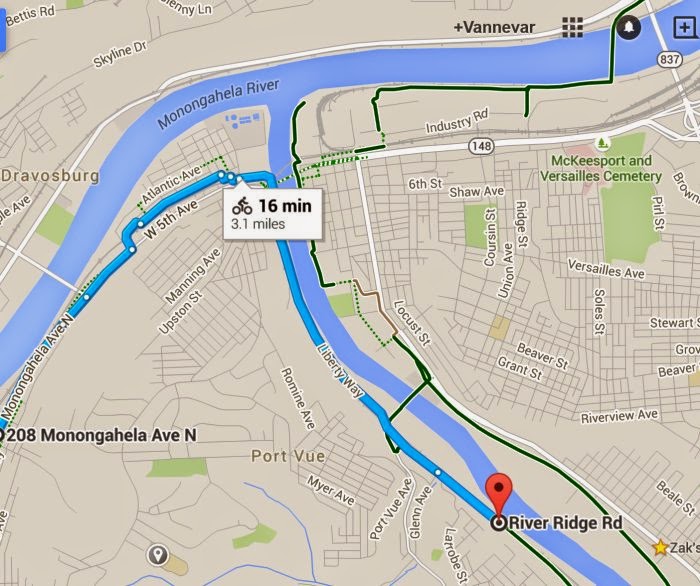 It was a funny temperature- wearing only a shirt it was cold, but with a windbreaker or a light wool sweater it was way too hot. No Goldilocks. I think I could have used a high-viz cycling shrug, just something for my arms and shoulders.


Rode out to Boston, to Dravos Cemetery / Landing / Campground, and then continued on another 4 miles (halfway to West Newton) to check out Driscoll and Sons Cafe, located right behind the Yough Twister soft-serve ice cream stand at the Sutersville Bridge. 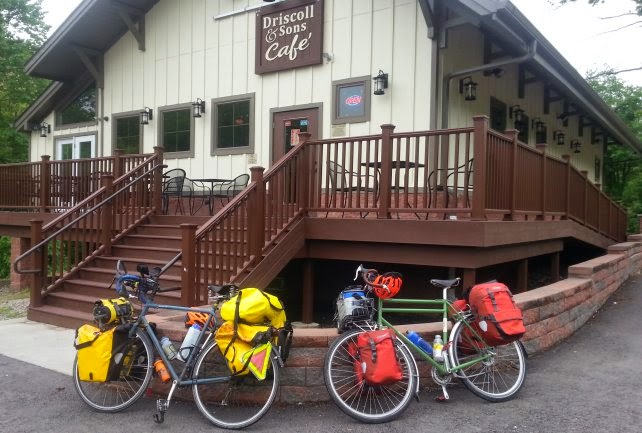 Wow, just wow. Where has this place been my whole life? A lot of trailside restaurants really exist by virtue of their proximity to the trail and the dearth of alternatives, but this place is excellent. Highly recommended. Clean, great staff, phenomenal food, wifi, good coffee, liquor license. I had a MonteCristo sandwich and R had a steak salad, we both felt like the place had way exceeded out expectations.

We bought a six-pack to go and they gave us ice in a bag, and we were off for the four miles back to Dravo under inauspicious skies. We'd gotten our tents up and were just building a campfire when the rain started. It was a cool evening and the rain was not expected.

It was a rainy, cold, dark night but I was warm, dry, and well fed in the tent. Nice evening. There is a lot of train noise along the GAP, but I never had a problem falling quickly back to sleep.

In the morning we made coffee and oatmeal and then started riding back. In Glassport I found a storefront using Poop-911 as a toll-free number, there's a Pittsburgh cyclist who uses that phrase a bit. 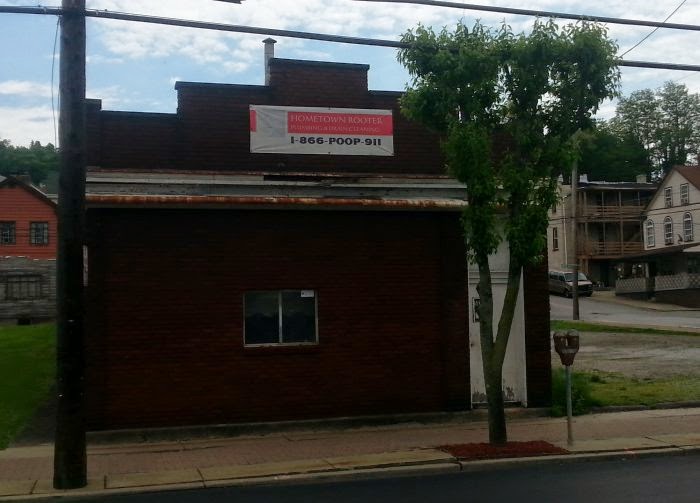 Along Peters Creek Road, the Art Students of TJHS have painted Jersey barriers with images of trail use: fishing, running, biking, walking.

We had a headwind all the second day, until we turned off the trail and into the neighborhood where R lives and then we picked up a tailwind as we climbed a heartbreaking hill. To give you an idea, the name of the housing complex is something like Precipitous Heights and he lives on something like Switchback Street.

Very nice ride. The Dravos Campground is in great shape, and continues to work well as the GAP campground closest to Pittsburgh. Driscoll and Sons Cafe is highly recommended, bike-friendly, and I'll go there again.

Saturday I rode around the city with a tour group that was composed of several pairs and trios. Nice folks, we rode around SouthSide and the NorthSide.

Monday was the first day of Bike To Work Week, so I rode from a meeting in Oakland to a work meeting with a web shop on Penn Avenue. Gosh it was hot. Saw Ray while I was waiting for the meeting in a restaurant. Saw @RickAroundHere at a nearby table. I like to think he was tweeting, wow guess who's sitting near me? That bike guy. Maybe not.

Saw this mural by Jennifer Howison at Sidewall on South Millvale, The Wanderer. 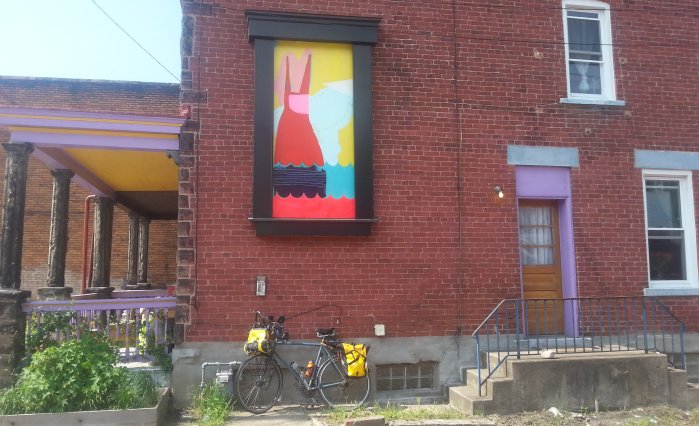 Great meeting. I must have looked a mess when I went in, the kindhearted staffer asked "Would you like some water?" After the meeting I rode up California Avenue, using the new switchback by PAT's headquarters, then McKees Rocks Bridge and Neville Island into Coraopolis.

Thursday I got to ride around Pittsburgh with three travel writers, that was interesting. My takeaway is that being a travel writer is possibly great deal, although you must put yourself into the hands of strangers and probably endure a lot of boosterism, and you probably can't take a nap whenever you want because the hosts really want you to see a lot of great stuff.

Friday was BikeToWork day and I could. not. make. it. because I had a medical test at 0830 that seemed to be important. Friday was also the May 412Flock! ride. This was a good group of 21 riders. Excellent tunes, sort of a techno-klezmer-polka vibe. This ride ended on Washington's Landing, as all the cyclists rolled up to the same spot that a couple had chosen for a romantic candle-light and wine assignation. Oops.

Saturday I rode with my wife's book-reading group from Deal PA to Cumberland MD. Nice ride (downhill!), no casualties and the rain held off until we were done. It was a well-organized ride, they had a support bus advancing to Frostburg, the Mile9 rest stop, and Helmstettler's Curve. 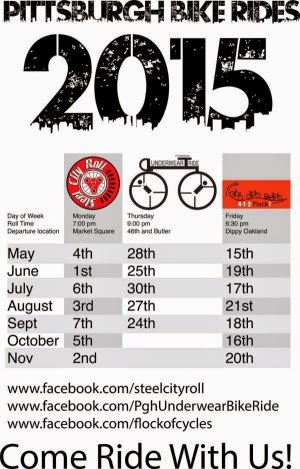 North Side, South Side, All Around the Town

5.8.2015 26m
Rode with a group from PNC Park on the NorthSide, out the Jail Trail to Hot Metal Bridge, then the SouthSide Trail to Ft.Pitt Bridge.

Rode the Allegheny River Trail out to the Convention Center, then the Penn Ave Bikelane inbound to the 6th Street Bridge, back to the NorthSide.

Struck out on my own, rolled down East Carson St. Stopped at O'Leary's for something to eat; great food but a hot space. Continued to Big Dog Coffee, used the wifi and had a pour-over. Finally, back to the Penitentiary and the car.

5.9.2015 13m
Rode with a group from Golden Triangle. Jail Trail to Hot Metal, SouthSide Trail to Ft.Pitt Bridge, Allegheny River Trail to Convention Center, Penn Ave Bike Lane to 6th Street. Roberto Clemente Bridge over to Fred Rogers, then the Ft. Duquesne Bridge. Blvd of the Allies back to the Jail Trail. 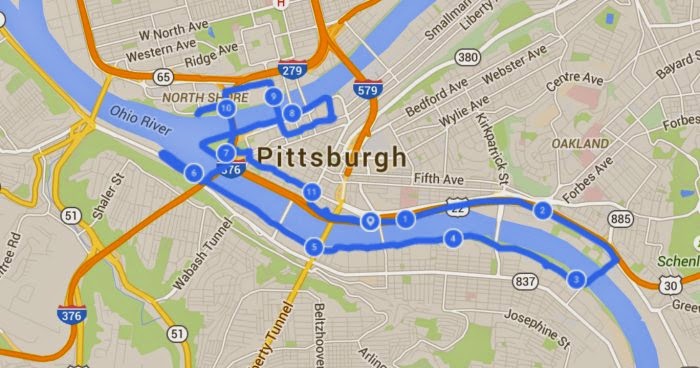 Today I think I finally got the fore-and-aft video camera thing mostly figured out.

5.5.15 12m
Today is May 5th, time for the first annual Flock412! Cinco de Mayo bike ride. The forecast called for rain but we were fortunate to have a dry ride. We started in Oakland at Dippy, where Lucia introduced Bici 101, a Spanish-language guide to bicycling in Pittsburgh. This is kind of exciting, there hasn't been such a thing before. It's produced in collaboration with FreeRide and BikePgh. 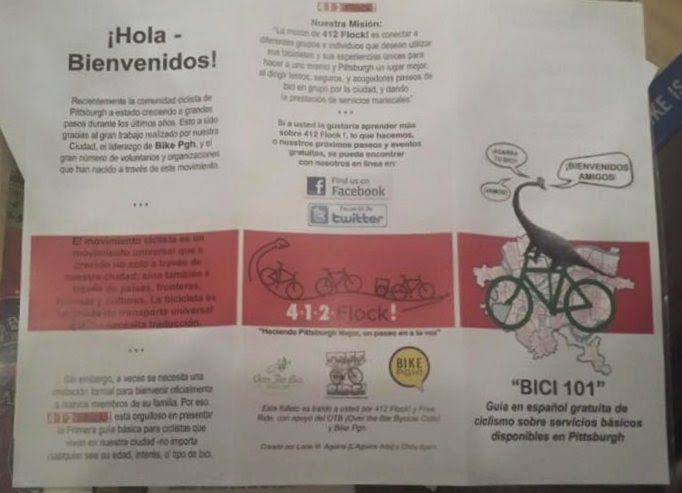 We started with a dozen riders, a few joined enroute and a few dropped off enroute. Great bunch. One young cyclist, 3-year-old Rowan, was awesome and was giving Exploding-Fist-Bump lessons. 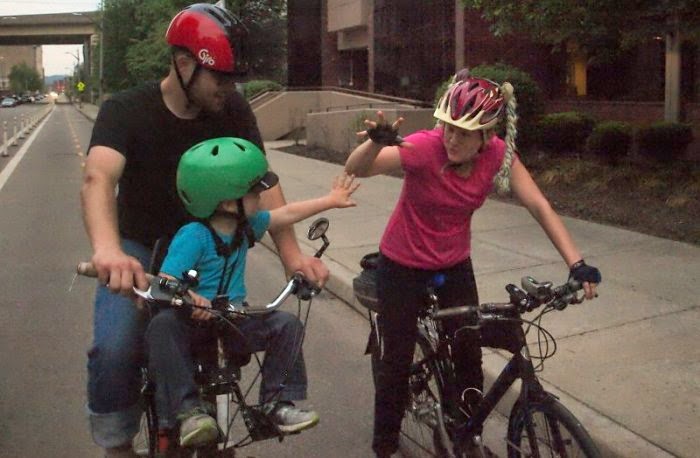 We rode through the Armstrong Tunnels, which was great. I wish I had a video of that, because the soundtrack played so well in the tunnel but my cameras didn't record everything I thought they would. This is an example of the sound track and another photo of R.

Excellent ride, and I really like the Bici101 brochure.

5.4.2015 31m
Started on the North Side in the afternoon with a few casual hours before a meeting. Rode through PNC's Picnic Park as I'm told it's referred to.

Rode to Market Square, and out the Penn Ave bike lane. Saw this new art by Jeremy Ramer at 35th and Charlotte:

Climbed up through the Allegheny Cemetery. It was a bit warm so I used the cemetery water spout at the top of the hill to pour cold, cold water on my feet which was very pleasant.

Another intersection to avoid bicycling to, based on the roadway names: FairMount and HillCrest. Life-sucking climb. 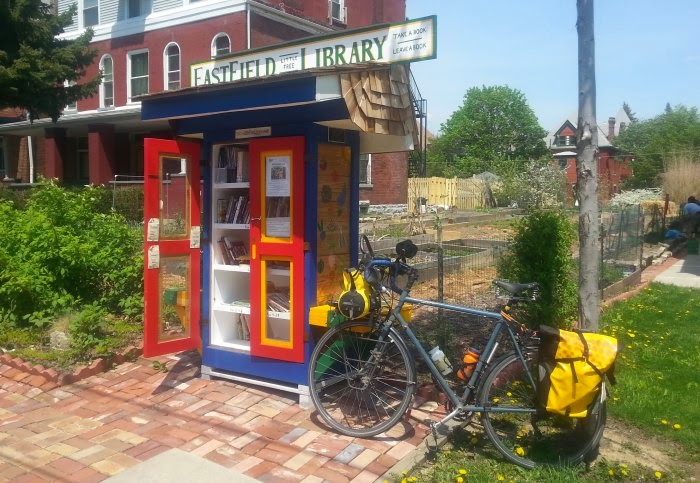 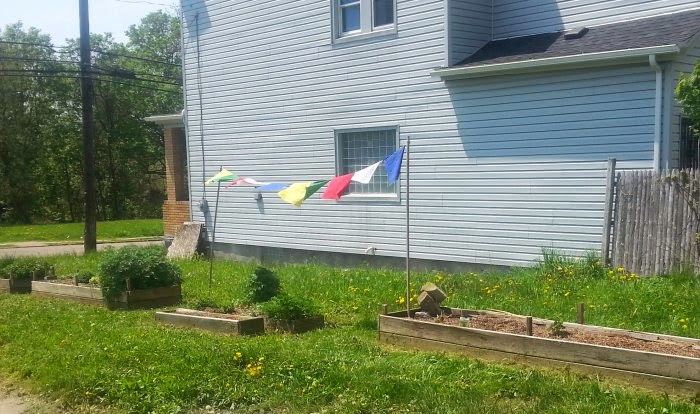 Stopped at Taza D'Oro which was excellent as always. Needed to go to Hot Metal Bridge, road via
Highland, Ellsworth, and Neville which was almost too perfect.

Crossed the bridge, checked out the newly developing marina at South Side Works. I hope the Marina broadcasts WiFi.

Rode over to Thick Bikes. They are so sophisticated, they had the bike I'm drooling over (Surly ECR) on display when I rode up. How do they do that? 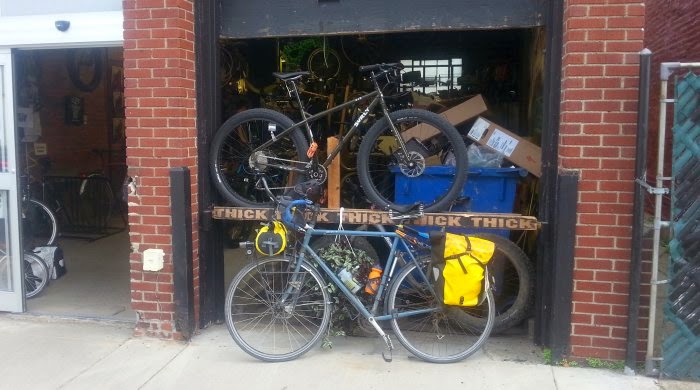 Needed to make a meeting in Hazelwood, found myself at Swinburne and Second needing to go outbound on Second during rush hour. I've heard that's a problematic transition but everybody was extremely courteous this time, no problem at all.

After my Hazelwood meeting, rode north and met Mikael, who accompanied me to the NorthSide. It started raining at the Science Center, and he reversed to get back to base.

5.2.15: 6miles
5.3.16: 30miles
Needed to run an errand at Waterworks Mall, so made it an opportunity to ride the Butler-Freeport Trail which I haven't been on for about 18 months. 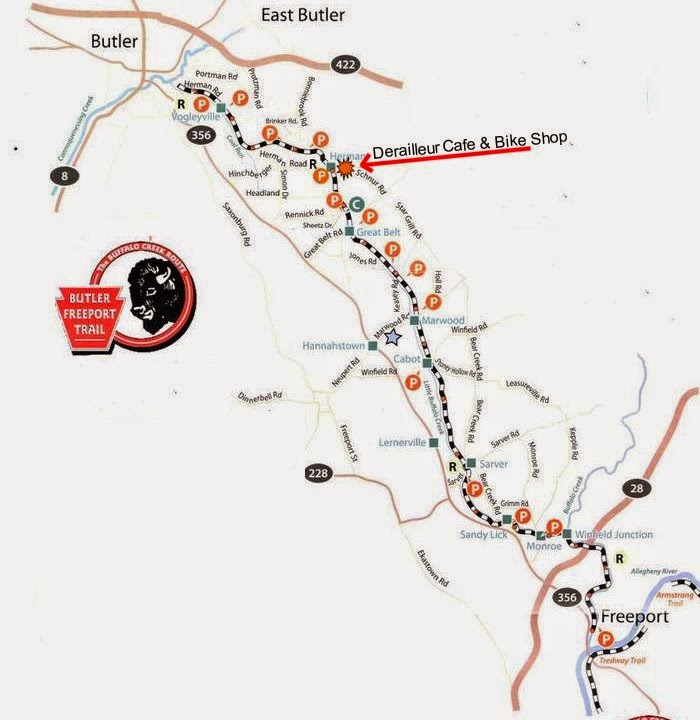 On the northbound leg I saw a cyclist pulling one of these, I haven't seen one before- 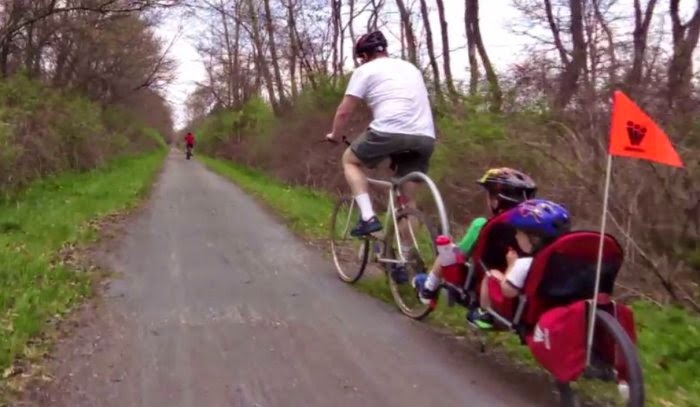 About four miles south of the Butler terminus, stopped at the Derailleur Bike Shop and Cafe. Pretty neat place. Fancy coffees and wonderful grill cheese with sun-dried tomatoes that would qualify as artisanal if this place were haughty, but it's not. I hope they do well.

Cafe in the front, bike shop in the back: it's the new trail mullet.