10/15/2013 #223 71m
Had a fantastic opportunity to participate in evaluating a trial run for roll-on, roll-off (RORO) bicycle service on Amtrak from Pittsburgh to Connellsville, PA. I haven't been on an Amtrak train since I was on active duty, probably in 1979.

Why is RORO bike service from Amtrak such a big deal? The logistical problem with bike tourism is the round trip; how do people get back from the bike ride? Take a look at the Katy Trail running west from St. Louis. Amtrak runs along the trail, and you can book a train ticket from one end to the other, or at any intermediate stops, with RORO bike service. Bringing your bike along costs an additional $15. You make a reservation for the bike service, and once you reserve a bike slot you're guaranteed to have a rack for your bike so you can travel with confidence. This sort of service really boosts the local trail economy along a trail.

Today's Pittsburgh backstory is: Amtrak wanted to test the effect of having between 4 and 6 cyclists get on and get off the train at each stop - Pittsburgh, Connellsville, Cumberland, Harpers Ferry, and DC. A call went out for volunteers: you'd get a one-way ride, get to see what it's about, and then ride yourself back on your bike. Who wouldn't try that?

So S. and I found ourselves meeting at oh-dark-crazy at the Bastille, in order to be at the Pittsburgh Amtrak station an hour before the 0520 departure of the Capitol Limited from Chicago, through Pittsburgh, to DC. In the station we met our bike-buddy Stu, along with fellow Pittsburgh cyclists Tom, Tim, and Jim. S's trip report is here, and also Stu's report is here.

With Roll-on, Roll-off, you just walk your bike out on the train platform, and wheel it into the baggage car. 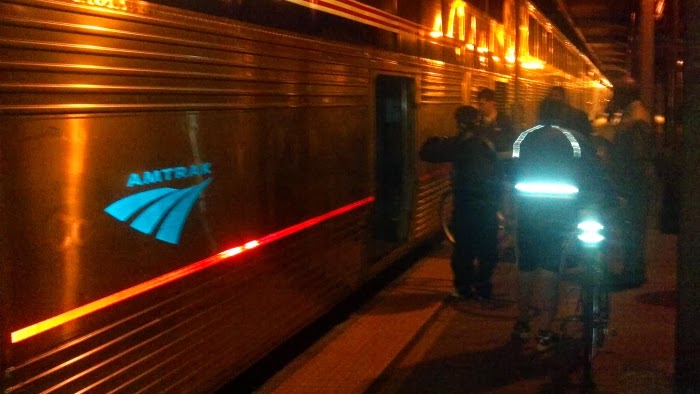 The graphic below shows the procedure for putting your own bike in the rack. We all felt well briefed on using the racks, but we suggested to the Amtrak staffers that mounting a demo rack in the station would have been helpful: 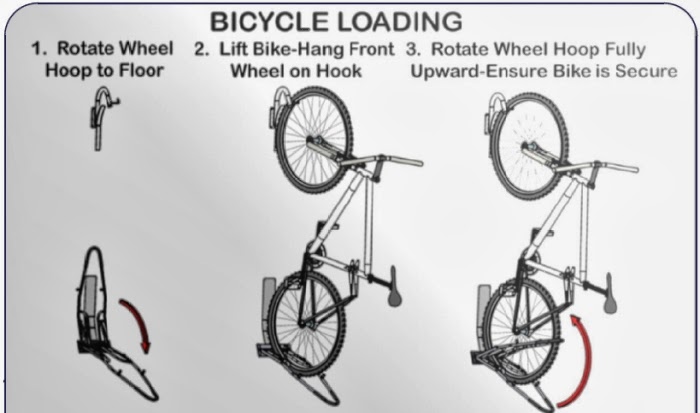 I had some concerns about my Surly LHT with it's two racks, full fenders, and mud flaps being compatible with the mounting hardware but there wasn't any glitches. 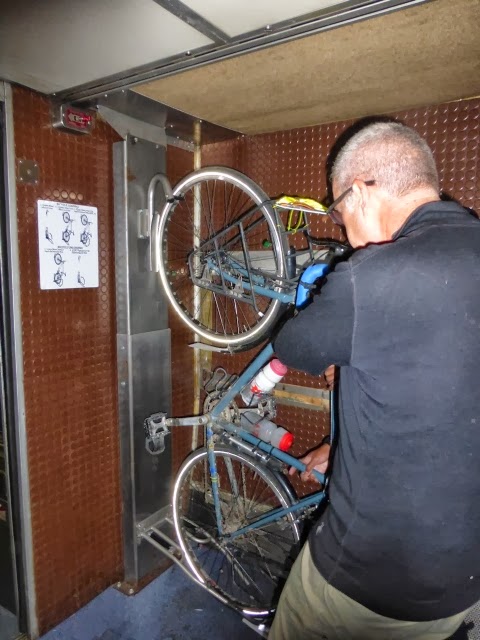 The Virgina Bike Federation reports on their trip segment here. The photo below is from Malcolm Kenton, a cyclist who also rode a Virgina segment of the evaluation; his blog post is online here: 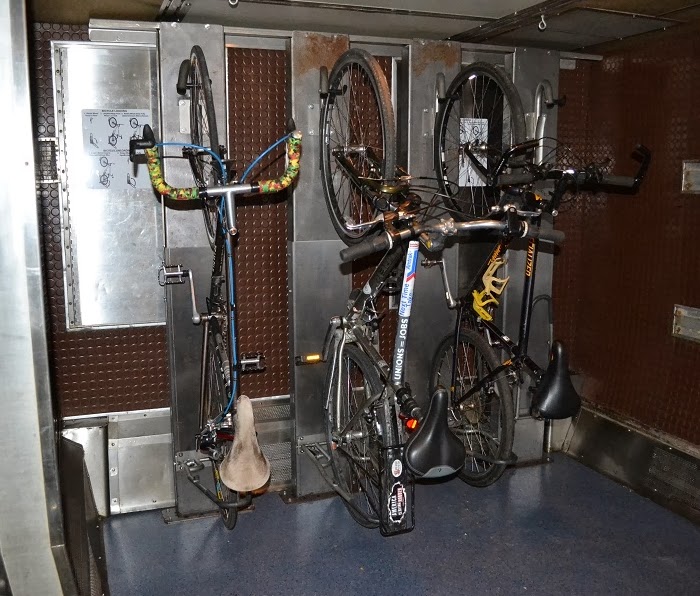 After putting our bikes in their racks, we took seats in the observation car. Once the sun rose we could see that we were passing along the Yough River. It was a very pleasant ride, and there was a dining car on the train. Eventually we reached Connellsville and we disembarked, and another group of cyclists was waiting to get on board with their bikes. 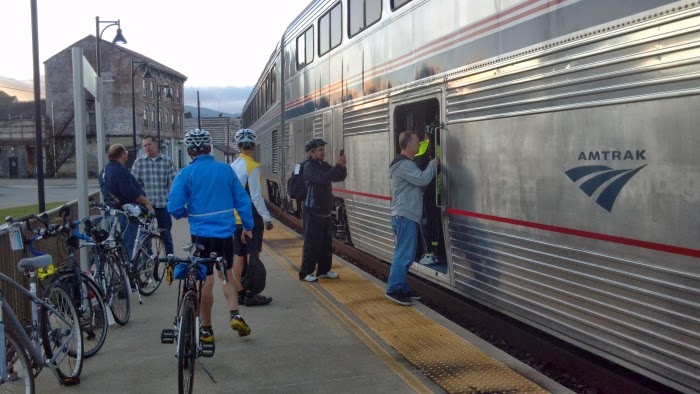 I think the Connellsville disembark/boarding went quickly. After the train left, it was a quick transition to ride across the river and join the GAP Trail back to Pittsburgh. Connellsville is very bike friendly. We stopped at Sheetz for a snack before heading out of town.

The bike ride back was excellent. Stu had not seen this segment of the GAP before. Weather was awesome. Departing Connellsville we saw that both of the free hiker-biker Adirondak shelters were occupied, one by a hammock that had been ingeniously strung across the rafters. We showed Stu the coke ovens dug into the hillside north of town and the Mailbox Formation at MP 111.

Today I learned (TIL) that the "W-signposts" along the trail were intended to tell train engineers when to blow their warning Whistles before a crossing. (Thanks, Stu!) 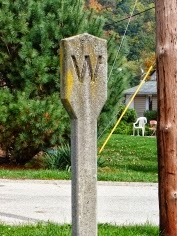 At West Newton we checked out the most awesome trailhead on the GAP, replete with bike shop, restaurant, drug store, the best rest rooms on the GAP (if only they had showers, too!) and of course GAP HQ. As we continued along we saw the Red Waterfall (caused by mine runoff with high iron content), the White Waterfall (caused by mine drainage with high limestone content), and met Al and Debby on their bikes, towing their felines Lucy and Tom in a special cat-trailer which was really well designed.

We passed the Dravos Cemetery Campground which had several travelers in it. This is the closest open campground to Pittsburgh, and with the opening of the Sandcastle trail segment it's seeing a lot more use; it's a very easy S24O from the city.

After a quick stop in Boston at the Green Boxcar, we rode through Dead Man's Hollow which prompted Stu to ask, how did Dead Man's Hollow get it's name? I was chagrined to not know, but I looked it up. From the website,


Despite all of its natural beauty and tranquility, the hollow is best known for the dark past that haunts it. Dead Man's Hollow has had a long history of tragic events and horrific deaths; many of them shadowed by inexplicable circumstance. Of course, it is the hollow's very name that might be the greatest mystery of all. Even with years of speculation, it seems that no one is exactly sure how Dead Man's Hollow acquired its frightful name.

Imagine how many people would ride Amtrak down to Connellsville with their bikes, if they could, and then bike back. The economic impact would be tremendous. All that's missing is Amtrak providing the same service along the GAP that they provide along other trails, like the Katy Trail.

I really appreciate Amtrak evaluating this type of service with an operational demo. My experience was very positive, and I would use this service once a month if it were available. Just the chance to ride the train to Cumberland for a two-day ride home, or to DC for a four- or five-day ride home, without having to disassemble my bike and worry about the logistics of the return trip, that would be so fantastic. It would make me an Amtrak traveler again, after thirty years away.