10/6/2013 #223 49m
Started riding at the Bastille with S, joined R at Point State Park, and we met a group of five cyclists we were to escort out to Boston PA and the GAP, beyond some navigation challenges.

They were a very nice group of folks. Took obligatory photos at the Point and with the Duck, then rode out on the Jail Trail to the Hot Metal Bridge: 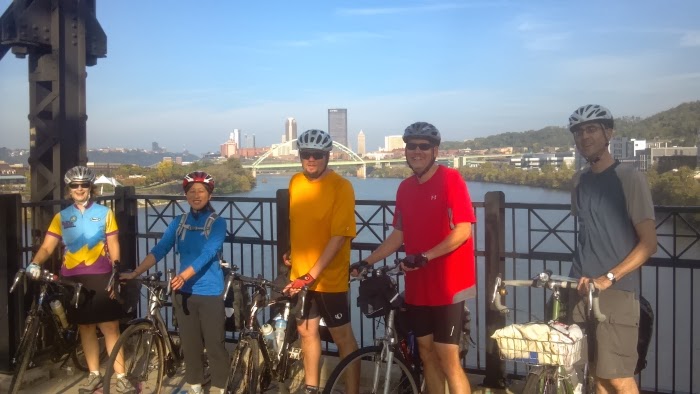 These riders being Coffeeneurs, we stopped at Big Dog Coffee so they could attend to their needs. I think they liked it. I also wonder if this doesn't make them Pittsburgh Coffeeneurs for tracking purposes.

We continued through the Baldwin Trail, Keystone Metals, Sandcastle and the Waterfront to the Pump House.

It was a beautiful day and there were quite a few people around the Pump House trailhead, including a supported ride group from Wilderness Voyagers. I thought one of the cyclists looked familiar so I inquired and it was, in fact, Tom Murphy - the mayor who drove the development of Pittsburgh's trail systems. In many ways, the Pittsburgh that I enjoy so much is the Pittsburgh that Mayor Murphy planned and developed.

Getting to meet Tom Murphy on the trail is like going to the Vatican and bumping into the Pope and having a conversation. The Mayor talked about how back in the day, there was tremendous resistance to the idea of bike trails and nobody wanted them. Now people can't get enough of them and they're an indicator of the city's attractiveness. Up, the mayor! It was really a treat to see him. I hope that somebody has the perspective to name a trail segment after Tom Murphy.

We continued across McKeesport and we bade the group farewell abeam the Durabond Bypass. Reversed and rode back, stopping at Mitchell's Fish Market for water and Golden Triangle Bikes for a snack. Crossed town via Grant Street to avoid the stadium crowds, and saw a very pink fountain at USX Plaza for Breast Cancer Awareness Month:

I've been wondering why the fountain at the Point hasn't been dyed pink as it has in previous years, I'm glad to see somebody has remembered.

The transition from the 9th Street Bridge back to the Bastille was quite smooth, and it was a perfect ride on a great day. 49 miles.