3.11.2014 #219 28m
In terms of recommending a great bike blog post, check out this from Tales From The Sharrows, which is (I've been told) an allegory. Totally awesome post.

Started at the Bastille with my old friend and bike teacher MC. We rode down to Market Square together, as he is nursing a somewhat problematic knee. Sat outside on a spring-teasing afternoon, it was very nice.

After a while we rode back to the Western Penitentiary. On the Chateau Trail, we passed a jogger. Wearing headphones, so he didn't hear my bell or my "passing on your left". As we passed he felt the need to express his disatisfaction by invoking the Big Guy's name in vain. Such angry.

Saw MC to his car. Reversed, southbound on the trail, came upon a jogger. I didn't realize it but it was the same fellow, in a space where the trail is narrow and the fence is pushed into the trail. The jogger was running in the center of the trail. I rang the bell. Rang it again. Yelled, "on your left". I still didn't recognize him. I thought, well he's going to get to see me, and processed to pass between him and the fence. Then I heard the same voice, invoking the Deity again. And I stopped and turned to meet the man.

He really didn't want to talk with me and kept moving, so I got back on the bike and - well, I passed him again, riding with him this time, and I must admit kind of encouraging him to taking out his earbuds so he could hear me, since he didn't hear my bell or my passing call. He seemed pretty sure that this wasn't a safe place to be passing anybody, and I should have waited until a wider section of trail. I reverted to type and told him what I thought about his attitude and continued along.

After a moment of riding along, I felt pretty foolish about it all so I parked the bike and waited for the runner to approach. Then I thought, if he's carrying a gun he might just shoot me, so I strove to project a happy peaceful aura. I smiled and asked him to stop and he did this time, and I said: I shouldn't have said all those things about you, and I'd rather discuss it than leave it this way. He said, my point it you should wait until I think its safe for you to pass, when I give up the center of the trail.

Then I realized: I've made the same argument with drivers, when I take the lane (which I feel pretty strongly is my perogative). This runner didn't use the term but he was using the same logic; in a sketchy narrow trail segment with a rotten, irregular surface, he was "taking the lane" and forcing the faster vehicle to wait until it was safe to pass.

Although I disagree with his analysis in this situation, I can't disagree with his theme and so I was surprised to conclude that we were in general agreement, with only a difference of judgement in this situation. And I know, when a driver tells me to be over on the right, I exercise my own judgement and they can piss off - so it's probably fair to make room for this guy's judgement.

I sort of wanted to mention the earbuds but I had previously stressed that point during my tirade, and I forfeited the moral high ground a bit so I apologized, then he surprised me by apologizing as well, and we shook hands. I liked the outcome. Life's too short for most pissing contests, especially when the other guy is using the same logic as me. I just hate it when that happens.

Rode across the Point again, over to Station Square, out to the South Side. What with this being Errandonnee Season, saw a Chance to accomplish Errandonnee 2014-Seven: Book Reading1 at SouthSideWorksRiverFrontPark, yep six run-on words in need of an acronym: SSWX-RVP. 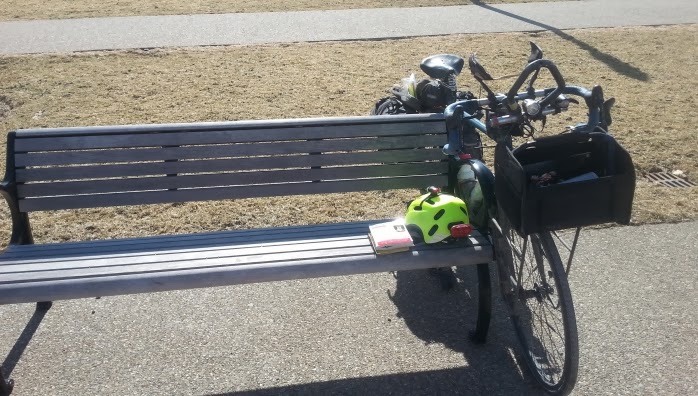 Saw a funny-trimmed power boat sitting real low at the stern and kicking up a major wake, towing a surfer in a wetsuit. Not bad for Pittsburgh on March 11th. I think this is probably the Surf Pittsburgh folks. 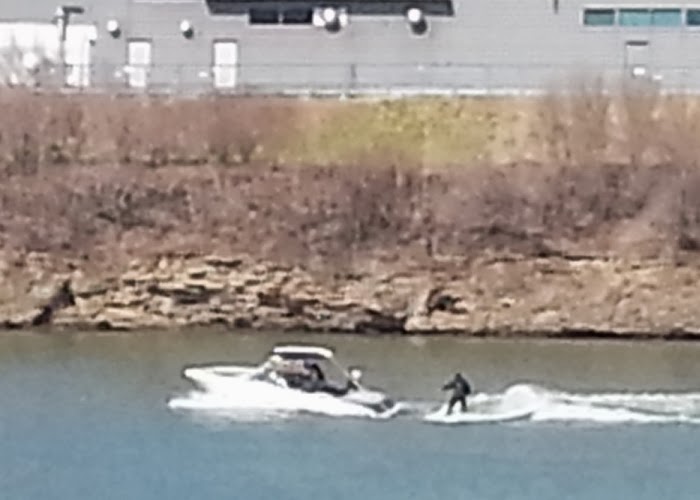 Rode up to Oakland, (did I mention wearing bike shorts and a jersey in March?) to eat dinner at Conflict Kitchen. Errandonnee 2014-Eight: Ride to Dinner1. Conflict Kitchen. Dinner was excellent, I enjoyed Bibimbop, a dish of seasoned vegetables on top of rice with gochujang (a sweet and spicy pepper sauce) (really very good food). I also had a glass of Sujeonggwa, a cinnamon-persimmon punch that was a real palate-grabber, yowsa! Also, how many North Korean Takeout shops are there? 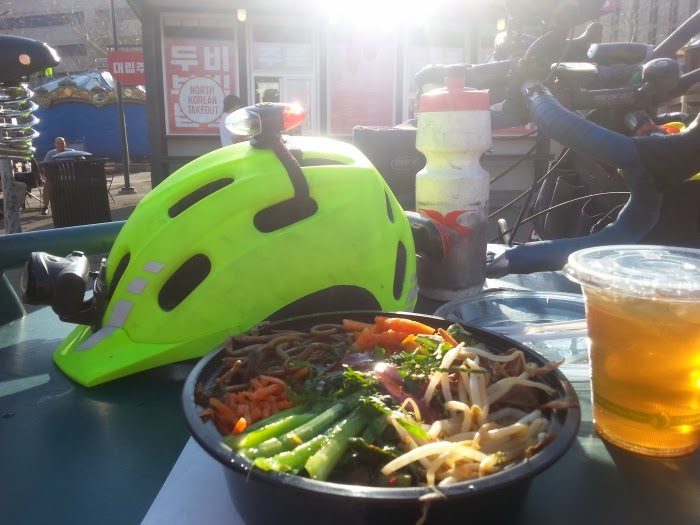 Rode over to my evening class at UPMC Shadyside. Enjoyed a pleasant, mild dark ride back to the North Side afterwards. Errandonnee 2014-Nine: Health/Wellness1, UPMC-Shadyside. 11 miles. Dark ride back. (Second Night Errandonnee segment!) No photos due to HIPAA considerations.