10/4/2014 3m
Coffeeneuring is a fun sort of coffee-oriented cycling challenge, administered within rules, expanded to include a wide spectrum of beverages. It aspires to both encourage people to ride during the challenging weeks of autumn and to familiarize people with the "riding within rules" philosophy of randonneuring, and we are grateful to MaryG for introducing us to it.

Today was the first day of 2014's Coffeeneur Season, and my wife and I were obligated to be in Grove City attending the offspring's Marching Band at the Sporting Event, so we brought our bikes along to help navigate the parking/ shuttling/ caffeine issues. We parked east of Grove City College campus and rode our bikes to Beans On Broad. 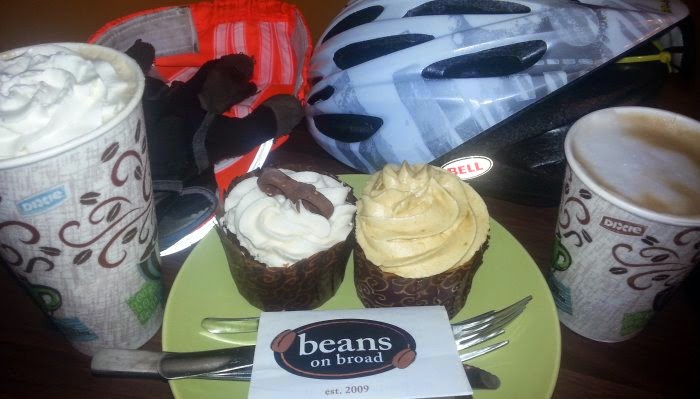 Our repast was a cappuccino with 2 extra shots, a white mocha, a pumpkin cupcake and a chocolate-salt-caramel cupcake. Everything was excellent.

This being Homecoming Weekend the place was packed but they kept the serving line moving pretty well and the drinks were very well made. Wifi, lots of space, excellent coffee shop. Cool second-level seating. The shop has an interesting set of belt-and-pulley driven overhead fans, I haven't seen this sort of arrangement before. 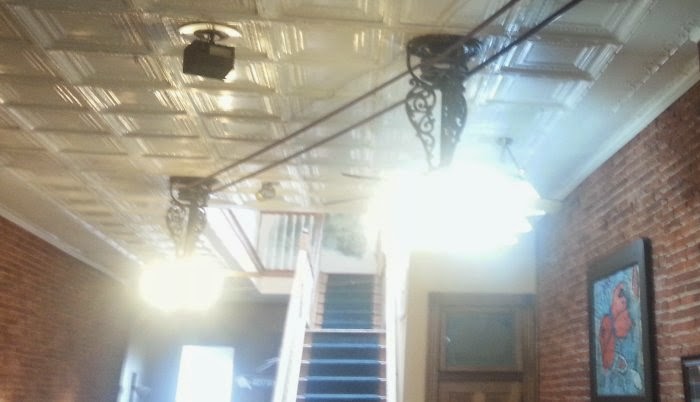 Departed and observed the Homecoming Parade. Repositioned to watch the Parade pass by a second time, because: bikes and offspring. Rode over to the Footballing Stadium, saw heavy rain approaching, took shelter in an Alumni Tent that nobody was using.

Watched a football game; the stalwart hometeam did not carry the day. Rode our bikes off the campus to our parking spot. 3 Miles; Coffeeneur 2014-01 accomplished.